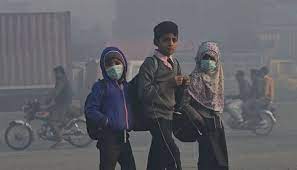 LAHORE: The Lahore High Court (LHC) on Tuesday ordered a seven-day extension in winter vacations across educational institutions in Lahore due to unrelenting smog.

The Punjab School Education Department had on Dec 14 announced winter vacations for public and private schools across the province from Dec 24 to Dec 31.

Last week, the LHC directed authorities to propose to the school education department to implement a two-week-long winter vacation as a step to help curb smog in Lahore.

The court previously ordered the closure of schools on Fridays and Saturdays. Hearing the public interest petitions on different environmental issues today, Justice Shahid Kareem of the LHC observed that vacations in schools and colleges ought to be extended due to the persistent smog.

A representative of the Pakistan Electronic Media Regulatory Authority (Pemra), who was also present during the hearing, told the court that letters had been written to satellite channels to run advertisements for the awareness and prevention of smog.
The court remarked that smog was in control to a considerable extent. However, it said the prevention of smog was the responsibility of the government.

The judge also summoned the director general of the Pakistan Disaster Management Authority to the next hearing. The hearing was adjourned till Jan 6.

A few days ago, the Lahore deputy commissioner submitted a report to the court containing recommendations to mitigate smog.
The report revealed that the Punjab government had already approved a project to procure 200 drone cameras under a World Bank-funded programme. It said modern drones with night-vision cameras could be programmed to report smoke emissions even during night-time.

The report further stated that long-range PTZ (Pan-Tilt-Zoom) cameras do not require human control and can automatically detect and record certain emissions from up to 3,000 metres distance. It proposed the installation of the PTZ cameras at smog hot spots in Lahore, including Mehmood Booti, Karol Ghati, Lakhodair, Turkey Road, Ring Road, Multan Road and Bund Road.

It also suggested the installation of at least ten air quality monitoring stations in the city and an increase in field posts for better implementation of government policies.

The report said the Parks and Horticulture Authority had been focusing more on ornamental plants, whereas urban green spaces should be used to purify the air and reduce “fugitive dust” in the city. (INP)