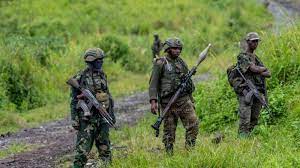 DR Congo (AFP): DR Congo’s army called an M23 rebel withdrawal from a strategic town near the eastern city of Goma a “sham” on Saturday, saying the militia is reinforcing its positions elsewhere.

The M23 group has conquered swaths of territory in North Kivu province in recent months and advanced to within a few dozen kilometres of Goma.

Under heavy international pressure to lay down arms, the Tutsi-led rebels took part in a ceremony Friday to deliver the town of Kibumba to an East African military force recently deployed in eastern Democratic Republic of Congo.

The rebels had called the move a “goodwill gesture done in the name of peace”.

The commander of the East African Community force, Jeff Nyagah, had also told reporters that the M23 was due withdraw to Mount Sabyinyo, which demarcates the border between the DRC, Uganda and Rwanda.

But the DRC’s army stated on Saturday that the handover was a “sham” designed to distract Congolese people and the international community.

Clashes with the M23 erupted on Friday afternoon in Virunga National Park, the military said, adding that the rebels had also reinforced several positions with a view to occupying territory west of Goma.

The DRC has repeatedly accused its smaller central African neighbour Rwanda of backing the M23, although the latter denies the charge.

The United States and France, among other Western countries, nevertheless agree with the DRC’s assessment.

A report by independent experts for the United Nations Security Council seen by AFP on Thursday also pointed to Rwanda’s alleged support for the M23.

Kigali deployed troops to fight alongside the rebels, and supplied them with weapons, ammunition and uniforms, according to the report.

Several diplomatic initiatives have been launched in a bid to ease tensions.