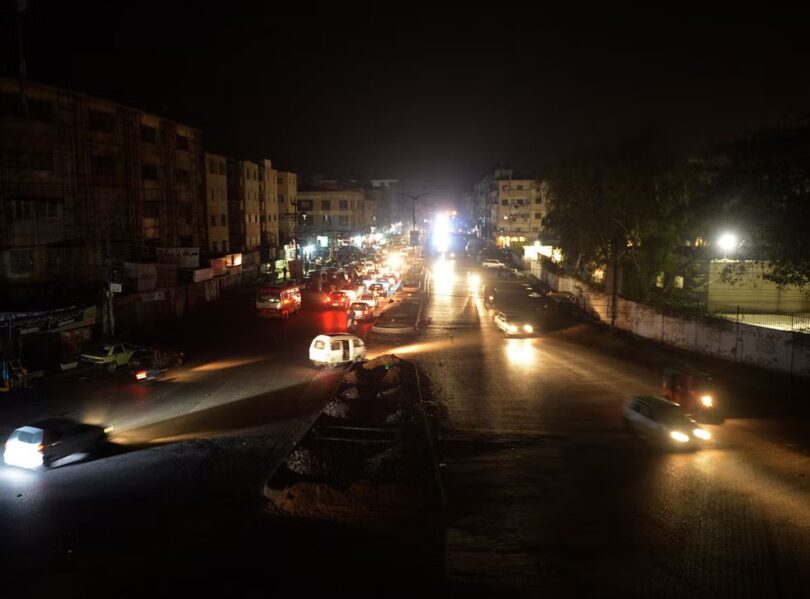 F.P. Report
ISLAMABAD, LAHORE, KARACHI, QUETTA: A massive electricity breakdown hit the country Monday morning disrupting life in all major cities including Islamabad, Karachi, Lahore, Peshawar and Quetta.
Sources said transmission lines of Tarbela and Mangla dams were tripped and all power plants in Guddu, Jamshoro, Muzaffargarh, Haveli Bahadur Shah and Balloki shut down. The NPC fuse was also switched off to save the system. The power supply went off suddenly at 7:32 am with IESCO, LESCO, MEPCO, SEPCO, QESCO and K-Electric were the most affected.
A number of cities in Sindh, Khyber Pakhtunkhwa, Balochistan and Punjab were without power supply. As many as 22 districts of Balochistan were without electricity and supply was suspended to 117 grid stations of IESCO.
According to QESCO officials, both electricity power transmission lines coming from Guddu to Quetta have been tripped impacting 22 districts including Quetta, Khuzdar, Sibbi and Dera Murad Jamali. Karachi, the economic hub of the country, also knocked out of the grid because of the NTDC system collapse
Sources said National Transmission & Dispatch Company (NTDC) and power distribution companies have launched efforts to restore the power supply which may take 27 hours. In a couple of tweets, the Ministry of Power said the system frequency of the national grid went down at 7:34 this morning, causing a widespread breakdown in the power system. System maintenance work is progressing rapidly.”
In another post, the ministry said the restoration of power supply from Warsak to grid stations has been started and in the last one hour limited number of grids of Islamabad Supply Company and Peshawar Supply Company have been restored. The country has faced such power breakdowns several times in the past and the recent one showed that the National Transmission and Despatch Company (NTDC) had failed to put in place permanent remedial measures to overcome such incidents.
The National Electric Power Regulatory Authority (Nepra) has recently imposed a fine of Rs20 million on the NTDC because of breakdowns and collapsing of its towers. A similar kind of power breakdown had plunged the whole of Pakistan into darkness on October 13, 2022 when a disruption occurred in two 500kV transmission lines in Karachi.
Before that a major power blackout was occurred on January 9, 2021 which had plunged much of Pakistan into darkness. In 2015 an alleged militant attack on a key power supply line plunged around 80% of the country into darkness for more than nine hours.
In October of last year, Karachi, Hyderabad, Sukkur, Quetta, Multan, and Faisalabad were hit by a power outage. At that time, the power minister said that nearly 8,000 megawatts of power went offline. Back then, Dastagir had said that the simultaneous faults in two power lines, which had triggered the breakdown, at the same time was concerning for the government. He had also announced that an in-depth inquiry was ordered and promised action.
Energy Minister Khurram Dastagir Khan Monday shared that a power breakdown across the country, caused by a “variation in frequency” in the country’s South, may take 12 hours to restore completely.
While sharing details about the fault, Dastagir told reporters that the power generation units are temporarily switched off in winter at night as an economic measure to save fuel. “When the units were turned on at 7:30am this morning one by one, frequency variation was reported in the southern part of the country between Jamshoro and Dadu. There was a fluctuation in voltage and the power generation units were shut one by one due to cascading impact. This is not a major crisis,” Dastagir insisted.
He said that the restoration efforts are underway and claimed that the supply to some grid stations had already been restored while complete restoration will likely take 12 hours.
“Peshawar Electric Supply Company (PESCO) and some grids of Islamabad Electric Supply Company (IESCO) have already been restored,” claimed the minister. Talking about the breakdown in Karachi, the minister said that the matter in the port city is complicated as it has a complete electric supply system of its own. “We provide K-Electric about 1,000-1,100 megawatts routinely, however, it will be restored within a few hours. It is not certain how long will it take to sort this issue. However, my target is to restore electricity in the country in the next 12 hours,” said the minister.
Meanwhile, the electricity supply is being restored in a phased manner after a country-wide power breakdown at 07:34 a.m. Monday which was caused by an abrupt drop in the frequency system of the national grid. The day-long power outages disrupted the routine public life across the country, with fluctuating internet services and electricity generators fully exhausted by evening due to constant burden and functioning. The electricity will hopefully be restored completely by tonight as the technical teams of the National Transmission and Despatch Company (NTDC) and other experts are busy in rectifying the fault, which occurred in the North-South system earlier in the morning.