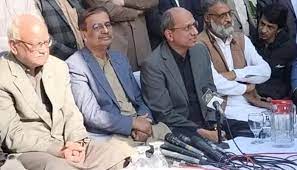 KARACHI (Agencies): As the tug of war for the Karachi mayor slot intensified amid rigging allegations, Pakistan Muslim League-Nawaz (PML-N) on Saturday announced to lend its fullest support to Pakistan Peoples Party (PPP) — its allied party in the centre. PML-N Sindh President Shah Muhammad Shah made the announcement during a press conference in Karachi alongside Sindh Minister for Labour and Human Resources Saeed Ghani.

During the meeting, both sides decided to work together as allied parties in Sindh, just like in the centre, and cooperate with each other not just for the upcoming mayoral election but also for all upcoming by-elections and the next general polls in the province. Talking to journalists after the meeting, Ghani said that every successful political party had the desire to clinch the Karachi mayoral position. “But as per the moral principle, the single largest party has the first claim on this post,” he added.

He reiterated the stance of his party that the PPP had emerged as the single largest political party after local government polls in Karachi. He said the PPP had the desire to take along Jamaat-e-Islami (JI) as the people of Karachi had also reposed confidence in the JI. “We need to work together to serve the residents of Karachi in the best possible manner,” he said. He expressed gratitude to the PML-N for offering support to the PPP for the upcoming election for mayor of the city. Ghani hoped that the PPP would get support from other political parties as well for the mayoral poll.

To a question, Ghani said that PPP, with 96 seats, had emerged as the single-largest party in Karachi, while JI is runner-up with 83 seats. Pakistan Tehreek-e-Insaf has won 43 seats while PML-N secured eight seats in the latest polls. He said that the next mayor of Karachi would function according to the powers prescribed for the mayoral position in the provincial local government law. “We don’t have the powers for the mayor in our pockets,” said Ghani while responding to JI’s criticism about mayoral powers.

To another question, Ghani said that it was their foremost desire to jointly work with the JI in the local government set-up of Karachi. For his part, the PML-N Sindh president said that both parties had agreed to work together for the development and progress of Karachi. He said that both parties had agreed to nominate the candidate for Karachi’s mayor on a meritorious basis. He hoped that rest all the stakeholders would also provide support in this regard.

He mentioned that PML-N and PPP had jointly contested the latest local government elections in a number of union committees in the city as this alliance would continue in the upcoming by-elections and general polls in the province. JI, which is trailing behind the PPP, has alleged that the polls were rigged. JI Karachi Emir Hafiz Naeem Ur Rehman has demanded repolling in the city but has maintained that his party could work with the PPP, despite their difference.