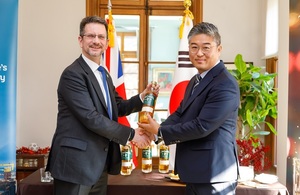 The agreement, which will see almost 10,000 bottles of McConnell’s Irish Whisky shipped to South Korea, has been signed with Korean distributor Goldenblue and has been supported by Invest Northern Ireland’s new team in Seoul.

The announcement follows Minister Baker’s visit to Invest NI’s South Korean offices last month where he met with Invest NI South Korean team, learning how they have helped facilitate the deal as £8 million funding from the New Deal for Northern Ireland has helped Invest NI to expand its presence from Seoul to Paris.

With its ambitious export plans, Belfast Distillery Company is now selling its products in over 30 countries, with its latest success showing how UK Government funding is helping Invest NI support Northern Ireland businesses on the world stage.

Invest NI’s new Korean presence has been instrumental in helping to secure this distribution agreement and I am delighted to see the hard work of the Invest NI team paying off for NI businesses.

New Deal funding is helping to promote some of the unbelievable talent and expertise that Northern Ireland has to offer and I hope the brilliant success of the Belfast Distillery team can help inspire others to take advantage of the opportunities offered by Invest NI’s new international locations.

This entry into another overseas market follows an announcement by Belfast Distillery Company in August of a multi-million investment to transform A Wing in Crumlin Road Gaol into a Whiskey Distillery and Visitor Experience, creating 49 new jobs in the heart of north Belfast.

This Korean agreement marks a significant milestone for our business. Relationships and personal connections are a very strong part of the Korean culture and we utilised the in-market knowledge of Invest NI’s team in Seoul to build a relationship with Goldenblue which has helped us secure our first entry into Korea and ultimately bring our product to this significant new market. We very much look forward to building on this success in Korea and other international markets in the future.

We are supporting Belfast Distillery Company to realise its global export plans and with a foothold in the Korean market, it is in a very good position for further growth. Its success showcases the scale of opportunities available to Northern Ireland businesses which is why we have chosen this as an area to expand our presence. Our in-market team in Seoul are ready and on-hand to work in partnership with Northern Ireland companies to help grow their exports and I would encourage local companies to get in touch and see how we can support.

For interested companies who want to explore Korea further, Invest NI is offering a ‘Spotlight on Korea’ tutorial on 8th February 2023 which will feature an expert panel of speakers who will offer insight and advice on key commercial opportunities in South Korea. For more information go to Spotlight on South Korea.