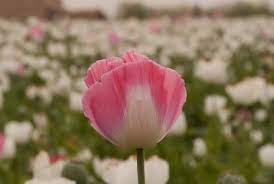 KABUL (ToloNews): The Ministry of Interior (MoI) said that drug trafficking from Afghanistan to abroad has significantly dropped.
But Hasibullah Ahmadi, the head of the counter-narcotics department in the Ministry of Foreign Affairs added that there is drug trafficking in some provinces.
He said that at least 4,500 people have been detained on charges of drug trafficking since the Islamic Emirate swept into power.
“After the Islamic Emirate swept into power, there has been significant attention in this regard,” he said. “Drug trafficking has dropped compared to the past. As I shared the figures, there were 3,536 crackdowns in this regard,” he added.
This comes as Indian officials said that 16 people including two Afghan nationals have been detained on charges of drug trafficking in the country.
“During the investigation, we have heroin processing labs in Ludhiana that were burst which was running by Afghan nationals and the Afghan nationals were arrested. Its linkage with Pakistan, Afghanistan and Dubai and many states of India,” said the Narcotics Control Bureau deputy director general Gyaneshwar Singh.
Analysts believe that the caretaker government should improve its intelligence networks to prevent the smuggling of drugs out of the country.
“There could be a systemic criminal organization of international mafia that could include the Pakistanis, Indians and some Afghans,” said Mohammad Hanif Alokozai, a political analyst. “It is important to activate an intelligent network in this regard to detect and prevent these criminals and bring them to justice so that the issue would be resolved inside Afghanistan,” said Aziz Maarij, a political
analyst.
Based on the figures by the counter-narcotics department, 134 drug labs have been destroyed since the Islamic Emirate came to power.