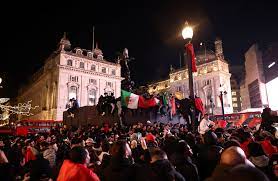 DOHA (Reuters): African teams have claimed several giant-killing results at World Cups but nothing like the unprecedented run of Morocco in Qatar that will fuel hopes of more representation at future tournaments.

Morocco have eliminated Belgium, Spain and Portugal — all ranked in the world s top 10 — to become the first African team to reach the last four and they now eye the scalp of holders France on Wednesday.

Cameroon upset holders Argentina in the opening match of the 1990 World Cup in Italy and went on to the quarter-finals while Senegal did the same to France when they began the defence of their title in 2002.

Algeria’s 1-0 defeat of West Germany in 1982 was also one of the tournament’s all-time shock results.

But for the rest, the continent’s achievements in the showpiece event have been limited, the reason why long-serving Confederation of African Football president Issa Hayatou put a lid on his members’ demands for more places at the finals.

“We need the result in order to make a strong case,” he repeatedly told CAF meetings.

Of the 160 matches played by African sides at the World Cup, only 37 have been won for a success rate below 25%.

Egypt were the first African participants in 1934, under Scottish coach James McCrae, but went home after one game, losing 4-2 to Hungary in Naples.

Most of Africa was still under colonial rule when the World Cup resumed after the Second World War but as countries gained independence, so CAF membership increased and Africa began to flex some muscle.

The continent boycotted the 1996 World Cup in England over the failure to grant Africa a place in the 16-team finals — it has to play off for one spot with teams from Asia and Oceania – and to protest against the entry of apartheid South Africa in the qualifiers.

A single African berth was granted for Mexico 1970 where Morocco finished bottom of the group, albeit holding Bulgaria to a draw in their last game.

Zaire, now the Democratic Republic of Congo, were the subject of ridicule in 1974 as they lost all three games, including 9-0 to Yugoslavia. Zaire’s Yugoslav coach Blagoje Vidinic changed the goalkeeper after going 4-0 down in 22 minutes.

A 3-1 victory for Tunisia over Mexico in Argentina in 1978 went a long way to restoring Africa’s morale and in 1982 two teams were unlucky not to advance — Cameroon going home after three draws and Algeria eliminated after the “Disgrace of Gijon” when West Germany beat Austria 1-0 in an allegedly contrived result that left the north Africans out third in the group.

The Germans scored early and the game progressively deteriorated to a virtual standstill in the second half. Subsequently, FIFA ruled the final two games in each group be played simultaneously to avoid any repeat.

Morocco were the first African side to qualify for the second stage in Mexico 1986, beating Portugal to finish ahead of England in their group.

Cameroon’s advance to the last eight in 1990 captured worldwide imagination, especially the goals and dancing celebrations of 38-year-old Roger Milla, whose inclusion had been ordered by the country’s president.

That achievement held out the promise that Africa would not take long to produce a World Cup winner, but only Senegal in 2002 and Ghana in 2010 were able to make the last eight.

With South Africa hosting in 2010, Africa had six teams but only Ghana got past the first round, denied a semi-final spot by a controversial handball from Uruguay’s Luis Suarez.

It got even worse in Russia in 2018 when no African teams made it to the last 16, sparking serious reflection about the direction of the game on the continent.

But Morocco’s class of 2022 have changed the mood and will be celebrated for years to come.

Africa has nine berths — plus a possible extra via playoffs — at the expanded 48-team finals in 2026, but there are now certain to be calls for more at tournaments after that.