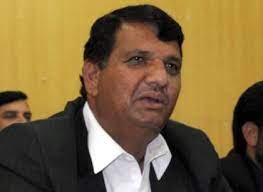 PESHAWAR: Adviser to the Prime Minister Engr Amir Muqam has handed over Rs one million cheques each to heirs of the deceased flood victims of Khwazakhela in Swat.

The cheques were handed over to the heirs of the flood victims on behalf of the federal government under the Prime Minister’s relief package. Engr Amir Muqam said that the government would continue efforts till rehabilitation and resettlement of all flood victims in the country. He said the compensation amount was meant to bring ease in the lives of floods victims.