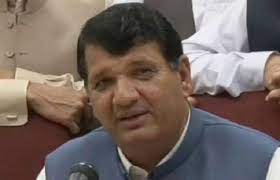 MINGORA: Adviser to the Prime Minister on Political and Public Affairs and National Heritage & Culture division Engineer Amir Muqam has said that on the eighth anniversary of the APS incident, we pay our respects to the martyrs and the entire nation should once again pledge against terrorism.

He added that Nawaz Sharif brought the entire nation together in the aftermath of APS incident. He further said that INSHA ALLAH, peace, stability and economic stability will be brought to the country in the leadership of Nawaz Sharif.

He said that InshAllah we will resume work on gas projects very soon, Nadra office at Char Bagh was my plan, today I am happy that I have established model office and along with it inaugurated Mangalurusoi Gas TBS and Feeder. A large rally was held at Char Bagh after inauguration of TBS Gas, Power Feeder Malam Jabba Mangalore and Char Bagh NADRA office .

Engineer Amir Muqam said that Imran has not done anything in his four years apart from false accusations and by stealing a gift from Haram Sharif, a watch. Engr. Amir Muqam said that first they claimed provincial accounts empty, while billions of rupees were being spent by the province on marches and sit-ins, all of them will have to account for it. He concluded that daily mail’s apology was a huge relief for the prestige of the nation.