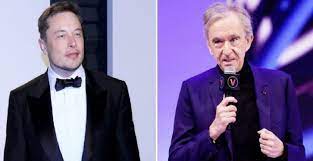 Yes! You heard it right. Bernard Arnault, 73, changed the whole billionaire list dynamic out of nowhere because people were expecting Elon to stay on top after his massive investment.

People might not know much about him; he was born in 1949 in northern France and earned an engineering degree from the Ecole Polytechnique. Initially, he was in the real estate business, but later he switched his business profile and headed to the fashion industry.

He used the windfall to purchase a controlling stake in LVMH, which had merged its two main companies, Louis Vuitton and Moet Hennessy, according to Forbes.

He transformed LVMH and changed the image of the group. Louis Vuitton, Sephora, and 70 other fashion and beauty businesses are all under Bernard Arnault’s direction at the LVMH conglomerate.

Tesla’s market value has come under pressure partly as a result of disappointing quarterly results and concern about disruption at one of its factories in Shanghai.

Investors have expressed worry that Musk may be distracted by his other ventures, including the rocket company SpaceX and running Twitter. He also regularly attracts criticism for some of the controversial tweets he writes to his 121 million followers.