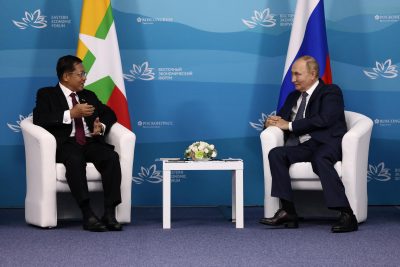 Myanmar’s abject deterioration since the February 2021 military coup accelerated through 2022, with more violence, retribution and pain spread across the rapidly impoverishing country of 55 million people. The military regime spent the year trying to reinforce its positions on the battlefield and its claims to institutional legitimacy. It is failing on both fronts.
For the generals in Naypyidaw, the current battles are, first and foremost, about personal survival. They have invested heavily in security precautions, but many officers tasked with frontline combat and policing roles have not fared well. Since the coup, thousands of the regime’s troops and officials have died at the hands of resistance forces. The army struggles to replenish its ranks. The limited life expectancy of junior soldiers only saps any lingering morale.
Opposition forces have grown in number, size and sophistication under the umbrella leadership of the National Unity Government. These forces also pay a heavy price for their resistance to military rule, with mounting battlefield losses. In July 2022, four activists, including prominent leaders Ko Jimmy, a long-time democracy activist and writer, and Phyo Zeya Thaw, a former National League for Democracy (NLD) Member of Parliament, were executed.
Many villages and towns have also suffered atrociously at the hands of the coup-makers. In one particularly egregious airstrike, 80 people died at a concert organised in a Kachin independence stronghold. Much of the country, perhaps half, is not currently under regime control.
Through these turbulent conditions, the economy has spluttered. Families struggle with galloping inflation and a devalued Myanmar kyat. The erratic availability of many supplies weighs heavily on a traumatised population. The economy’s estimated 16 per cent contraction in 2021 is further complicated by inflation of around 16 per cent in 2022, according to the Asian Development Bank.
Internationally, the regime relies on Russia and China for diplomatic and military support. Russia’s aggression in Ukraine has fused the relationship between Moscow and Naypyidaw. Yet it would be an exaggeration to suggest the two countries have a deep affinity. The Myanmar regime’s isolation is growing in ASEAN, where powerful regional voices are no longer reluctant to denounce the regime.
In Malaysia, Indonesia and the Philippines, but also in Singapore and Cambodia, there is deep concern about the damage the coup has done to Myanmar’s standing and its future in ASEAN. Discussion of expulsion, while still an unlikely outcome, is in play because Senior General Min Aung Hlaing and his key lieutenants are so unpopular across the ASEAN capitals.
Yet NLD leader Aung San Suu Kyi is still locked up — sentenced to 33 years’ imprisonment by military courts since the coup. Many other key figures in the NLD government, such as President Win Myint and various former Ministers, have joined thousands of other activists and resistance fighters in jail. The self-serving secrecy of the regime’s judicial proceedings means nobody gets a fair trial.
In one of the only bright spots in 2022, the regime released a large number of Myanmar and foreign detainees. Late in the year, Australian economics advisor Sean Turnell, former British Ambassador to Myanmar Vicky Bowman and her husband, artist Htein Lin and other Japanese and American detainees were all released. While Canberra, London, Tokyo and Washington welcomed their freedom, the reality is that Myanmar has no friends these days among the Western democracies that once so heavily backed the political shifts that brought Aung San Suu Kyi to power.
The questions that now confront Western policymakers are different ones. They require careful calculations about the prospects of anti-regime forces toppling the generals in Naypyidaw, about the internal stability of the regime itself and about the dire realities of a further spiral into a wider war. The same questions are of concern in Bangkok, New Delhi, Beijing, Singapore, Jakarta and many other places because the unpredictable regional consequences will be felt for many years to come.
As the second anniversary of the coup looms, the next phase of political and military confrontation is crucial. The generals aim to convince the Myanmar people and leaders across the Asian region that the best bet is for a managed electoral process, far short of a democratic one, to re-populate the country’s shuttered legislatures with regime-aligned figures and opportunistic ethnic leaders. Senior General Min Aung Hlaing guesses that other geostrategic priorities mean Myanmar’s military hardmen will again get their way, especially with China and Russia still in Myanmar’s corner.
What has changed in the past year is the broader landscape of plausible external responses. Western democracies have shown themselves willing and able to support Ukraine’s armed struggle against the Russian invasion. Circumstances in Myanmar are not analogous, and yet the years-long anti-coup resistance has demonstrated, in case anybody doubted, the deep commitment of the Myanmar people to their own democratic ideals. The forces opposing the coup call for more support — in terms of military training and equipment, and also heftier humanitarian relief.
They want weapons that can shoot down regime aircraft and request access to the other tactical advantages that have made Ukraine such a miserable battlefield for the Russian army. What remains to be seen is if their calls for greater support lead to any material change in policy from the democratic West. The most likely outcome in Myanmar is that longstanding hesitation about entanglement in a wider war will discourage foreign players from taking more aggressive, interventionist approaches. Yet the policy calculations could look different later this year, especially if the battlefield momentum swings further behind the National Unity Government and the anti-coup forces.