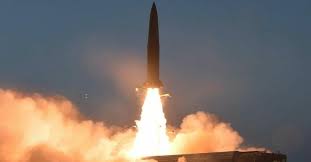 North Korea fired t-wo ballistic missiles, the South Ko-rean military said. The launches come days after Pyongyang said it had tested a new “high thr-ust” engine in a bid to ad-vance its nuclear and missile programs. Experts warn that North Korea is “preparing for a nuclear war.”
North Korea fired two ballistic missiles, the Seoul military said, days after Pyongyang announced it had successfully tested a solid-fuel engine for a new weapon system.
Military tensions on the Korean Peninsula have soa-red this year as Pyongyang conducted unprecedented mass weapons tests, including the launch of its most advanced ICBM last mo-nth, according to The Guardian.
South Korea’s Joint Chiefs of Staff (JCS) said on Sunday it detected two ballistic missiles fired from the Dongchang-ri area in North Pyongan province. The missiles were fired from 11:13 to 12:05 local time towards the East Sea, also known as the Sea of ??Japan, the report said.
“Our military has stepped up surveillance and vigilance by working closely with the United States and maintaining a state of full readiness,” the South Korean Chiefs of Staff said in a statement.
Japanese Deputy Defense Minister Toshiro Ino said the missiles fell into the sea and so far there has been no damage to aircraft or ships in the area.
The launch came just days after North Korea tested a “high-thrust solid-propellant engine” and state media described it as an important test “to develop another new type of strategic weapon system.” The development could allow Pyongyang to have a more mobile and hard-to-find arsenal of intercontinental ballistic missiles capable of reaching the US mainland.
North Korea has condu-cted a series of tests of nu-clear-capable ballistic missiles in recent months, inc-luding last month’s launch of its longest-range experimental liquid-propellant ICBM, the Hwaseong-17, designed to carry multiple warheads.
Ankit Panda, a nuclear policy expert at the Car-negie Endowment for Inter-national Peace, told CNN last week that the pace of testing this year shows Pyongyang has become a missile power. “The big picture is that North Korea is literally turning into a major operator of large-scale missile forces,” the expert said. – The word “test” is no longer appropriate to describe the majority of North Korean missile launches. Most of the rockets they have launched this year are part of military exercises. They are preparing for a nuclear war.” Ankit Panda and other analysts point out that North Korea’s missile tests are in line with an ambitious plan that Kim Jong-un developed in 2021 to make North Korea a powerful power in this area.
Some experts say North Korea will eventually use the expanded arsenal to push for sanctions relief and other concessions from the United States.
The exact status of North Korea’s nuclear strikes remains a secret, as all of its ICBM tests in recent years have been conducted at a steep angle to avoid neighboring countries.
Some experts speculate that North Korea already h-as operational nuclear-tip-ped missiles that could hit the entire United States. B-ut other analysts believe that Pyongyang is still a lo-ng way from acquiring such weapons, saying the DPRK has yet to publicly prove that it has the technology to protect warheads from the harsh re-entry conditions.
The US and South Korea have stepped up their regular military exercises that provoke North Korea to retaliate. Washington and Seoul are seeking to further strengthen their joint def-ense capabilities in the face of North Korea’s advancing nuclear program.
North Korea has threatened pre-emptive use of nuclear weapons in potential conflicts with the US and South Korea, and the US military has warned Pyongyang that the use of nuclear weapons “will lead to the end of this regime.”