It was 15th May 2022, when we came to meet with our friend Mr. Ali Raza (who is now serving as Assistant Professor at Govt. Degree College EkkaGhund), for time being I was shocked, when I saw a large number of people gathered in his Hujra in Dawatkor (around 2-3 kilometers away from the main Mohmand to Bajure Road). On inquiring I was told that the Tribal elders, spiritual leaders and other people are gathered to impose ban on cutting of trees from the adjacent mountains from Dawatkor to Enayatkor and if anyone found violating the rules, he/she will be fined 5000 Pakistani Rupees.

After lunch talking with 45 years old RoohUllah, a spiritual leader belongs to Akhoonzadgan village of HaleemzaiTehsil, said “We have imposed NAGHA on Inayatkor, Dawatkor and Ghaiba Mountains. The Jirga being held before half a year in Dawatkor has decided that no one is allowed to cut trees from these mountains, this band will be imposed for the next coming two years.” He added.

On inquiring about the said tradition and custom, Gul Bashar Sheraz, 38 years old Deputy Range officer of Wildlife department from upper Mohmand said that NAGHA custom is as old asPashto tradition (Pakhtunwali in Pashto Language), it comes incategory of the main components of Pakhtu Traditioni-e Pakhtunwali,Ashar, Lakhkar, NAGHA and Jelab. “In this tradition the Elders, Maliks or religious leaders of a specific area impose ban on cutting of trees and other herbs and shrubs of specific area for a specific time period.” If someone breaks the rules fine has been collected from him/her by those Elders, who impose NAGHA, usually NAGHA is imposed on the trees, herbs, Shrubs, Climbers, Creepers and other and seasonal plants present in a specific mountain by the adjacent people. He added,
About the life saving tradition of NAGHA’s history Gul said that in olden days there were no documented proofs of NAGHA, the elders verbally decided a specific fine in form of money, which has been collected from the violators and this amount were used for the welfare activities of that community.

About the benefits of NAGHA he said that this is very old tradition, which gives life to countless number of organism, herbs, shrubs, trees, birds, animals and so many other species, besides this when ban of cutting trees is imposed on certain mountains, the trees and other herbs and shrubs grow very quickly there, which can be used by those community for making fire in their kitchen and making roofs of their rooms.

About the NAGHA tradition he said that on finishing the time period, it is said by an announcement from the elders (who imposes) that NAGHA has been lifted, so on those specific days all the people of village go to mountains and collect woods and Grass, which can be used for different purposes in their homes.

A 73 years old Malak Haji Jalat khan, belongs to Main Head Quarter Ghallani said that, I remember in 1961-62 we were impose NAGHA on the hands of offspring of Peer baba, the name of that person was said Abdul Lateef( who was famous on the name of BachaSaib), in the presence of our elders, we were gathered and make a verbal decision of imposing NAGHA in his presence, sometimes we just take signs from the elders on a blank page, after that all the people were strictly following that NAGHA. After the death of Bachasaib, we used to impose a fine of 3-5 hundred on NAGHA, now the fine reached up to 15 thousand, if someone cuts a single tree, a fine of 15000 is collected from him. The system of knowing the violators is so simple, if someone see the violation, he informs the elders and give a statement in his presence, if the violator is not agree with the statement of that person, he has to take oath on the Holy Quran and shows his innocence.

Haji Jalat said that now we have more than 2 thousand acres of area, which have trees and where the NAGHA is imposed, the trees includes Acacia modests, olive, jujube, Blackberry (gwargara in Pashto), we used to cut these trees for marriage, Hujra and mosque purposes, but now we have imposed band on these as well.

Mr. Jalat said that after FATA merger the district administration is directly involved in this old tradition, they says that took violators in jail just for 2 days, then they release him, they are not collecting fine from them. Besides this, the watchers of forest department are directly/indirectly involved in the cutting of trees, so the govt. should take action on this and I request the forest officers to save the trees as this is the only hope of life for sheep’s, cows and other animals in Mohmand tribal districts. He said that once, Frontier corps men also helped us, they also used to save trees from cutting.

A 49 years old NooranAfridi, who is a Doctor by profession, belonging to Terah (a beautiful valley of Khyber Tribal District) said that NAGHA culture is still present in TerahMaidan area. In our village, the Elders of a Jirga impose ban on cutting of Cedarwood, Pinus Logifolia (Chilgoza), and so many other precious trees for specific time period. These trees are used in manufacturing furniture, expensive ornamental things and so many other purposes. But if there is a marriage ceremony in someone’s family, they have been allowed to cut a specific number of trees, depending upon their needs. 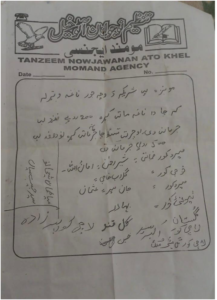 This is a written form of NAGHA, which has been imposed in Attokheel, Kamalay area of Tehsil Haleemzai by organization of Youth of Atokhel. The Pashto language text written on the document says that we have imposed ban on Wachajawara (A place around 20 KM away from the main headquarter of Mohmand Tribal District). The documents further says that if anyone disobey the rules and brings one bundle of grass for animals, from him/her a fine of PRs: 200 will be collected. But if someone deliberately brook NAGHA tradition, he will be charged PRs: 500.

Besides this, from each village a granter has been selected, who will be responsible of their own territory. 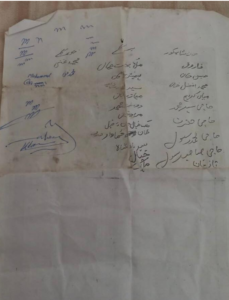 This is another old documents of NAGHA tradition, but it shows only names of the participants, who imposed NAGHA. This documents does not show any other information.

In exclusive interview with SadiqUllah, 52 years old employee of Forest Department, Upper Mohmand, who is currently working as Senior Forester said that NAGHA tradition is present in around every tehsil of Mohmand Tribal Districts, in majority cases it has no proper documents.

Acting Range ForestOfficerSadiqUllahadded that different kind of fines are imposed in NAGHA tradition, which varies from one to another tehsil and area, in Pandiyali Tehsil the ban is 5000 Rupees, but in some areas of Pandiyalai the people impose a fine of a goat as well.

About the environmental benefits of NAGHA tradition, Senior Forest officer said that due to NAGHA tradition the Trees gainlife and stability, which helps in climate change. Due to the greenery environment the quantity of rain increases, ultimately the forest department use the rain water for agriculture and other project and even in some cases for drinking purpose also.

Explaining the benefits of NAGHA custom, Mr. SadiqUllah said that the saved trees give oxygen and absorb Corban dioxide which helps in weather, beside this the people use these trees for construction and furniture purposes and the wild animals take their foods from these forest. The economic and NTF (Non-Timber Forest) forest’s benefit includes, business and economy. According to official sources more than 5 cores rupees of Honey Bee businesshave been done in Mohmand Tribal Districtin a single season.

A University Student WasimAkram belongs to Pandiyalai Tehsil, Lower Subdivision of Mohmand Tribal District said that one of my friend said that let’s go to kandaokalay (Village), it was around 5PM, when we reached in the said village, 50 years old samandar khan kaka with 6-7 other elders gathered in the mosque of a that person, who’s women violated NAGHA of Sar-ziyarat mountain, who have been seen by other women in the same village, They took 5000 rupees as a fine, as the women of his home brought woods for kitchen fire purpose. MrWasim added that usually when the NAGHA is imposed or disclosed, an announcement is made in the mosque for the information of general people. As there is very limited sources of information, so the said news is communicated by men to women in their homes. In the reply of the Question:What is the set up for watching there,how they know that the rule is violatedMr, Wasim added that usually the elders who impose NAGHA assign duties to specific people, who are frequently visiting the imposed cites.

Environmental scientist believes that If NAGHA custom is applied properly with its full Zeist by local Administration, ENGO’s and other concerned Departments with the full participation of local community, countless trees, herbs/shrubs and other seasonal plants may be safeguarded from cutting, as a result, it will have good effect on climate and Biodiversity will be safeguarded. Beside this, there will be different economic benefits for these people in the form of hunting of birds, fishes, wildlife and it will promote tourism in the region and the new Era of rich Biodiversity will be started, which is very much helpful in our food and fighting climate changes.

The Writer is Radio Producer and freelance Environmental Journalist, who tweets on @Muradonline123