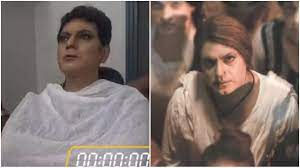 He is going to perform the role of a trans-women in his upcoming movie ‘Haddi’ which is stated to be release in 2023.

He dropped a 38 seconds snippet to his Instagram and twitter which showed his whole look starting from the makeup to wearing a girly dress and a long silky wig.

“Here’s a sneak peek into my transformation in #Haddi. #Haddi releasing in 2023”, he captioned the video.

He donned his look from the Zee Studio which also shared the short clip on their Instagram page captioning:

“A transformation worth watching!

Took @Nawazuddin._siddiqui 3+ hours to get into the skin of his character in #Haddi”

It is pertinent to note that Nawazuddin Siddiqui took three hours to opt the look of a trans-women.

He further stated that performing this role made him respect female actresses even more. “Now I know why an actress may take longer than her male counterpart to get out of her vanity van. It’s absolutely justified. Women have a lot to do, including hair, makeup, clothes and nails apart from just acting.