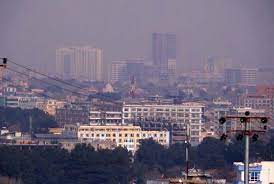 KABUL (TOLOnews): Officials at the National Environmental Protection Agency (NEPA) said that in the past month air pollution has increased in the capital.
The agency added that efforts are going to reduce air pollution in Kabul.
The burning of coal, plastic, and other cheap fuels as well as the exhaust emissions from old vehicles are the main sources of air pollution in Kabul.
“To see the level of air pollution we just have one station that is in our department and for this reason we can’t check the level of air pollution all over Kabul,” said Mohammad Basir Amin, head of the Directorate of Regulation and Control of Air and Garbage Pollution.
Meanwhile, Kabul municipality said that they have started installing filters to prevent pollution in Kabul.
“We have 2,800 buildings, among them just 500 have filters,” said Nematullah Barekzai, a representative of Kabul Municipality.
“Because of poverty, coal is acceptable to poor people. Consumption of it creates air pollution,” said Sayed Qayom Hashimi, an analyst at the National Environmental Protection Agency.
Air pollution in the capital is one of the issues that increases every year on the eve of the cold season.
But some Kabul residents expressed concern over the air pollution and said that due to the increase in air pollution, the number of patients in the capital has increased.
“Air is so polluted and it’s creating a lot of diseases,” said Mohammad, a Kabul resident.
“Our people are not able to buy fuel and they use material that creates more pollution to warm their houses,” said Jawad, a Kabul resident.
“Our people become sick and we call on the government to pay attention to this issue,” said Shoyeb, a Kabul resident.
According to international experts, Kabul is among the most polluted cities in the world.