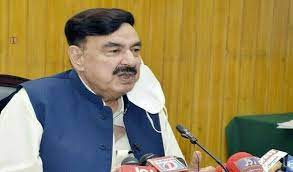 Taking to Twitter, Sheikh Rashid said the Punjab governor’s notification to denotify Chaudhry Parvez Elahi as chief minister of the province was unconstitutional and stressed that the CM could dissolve the assembly.

The former interior minister said how the government, which was even afraid of the local elections in Islamabad, could announce the general election. He claimed that the PDM and its allies would try to extend the tenure of the caretaker set-up and end cases against them.

On Friday, a larger bench of the Lahore High Court (LHC) suspended Governor Balighur Rehman’s notification of denotifying Chaudhry Parvez Elahi as Punjab chief minister. Ali Zafar, CM Elahi’s counsel, submitted the unertaking duly signed by Mr Elahi, stating that he would not dissolve the Punjab Assembly until he obtained a vote of confidence from the house. Punjab Govenor Balighur Rehman’s lawyer argued that the governor would take his notification back provided the court bound the CM that it would not dissolve the assembly.

Justice Asim Hafeez remarked that the Article 130 of the Constitution of Pakistan barred court from halting the CM to dissolve the assembly after the court conceded to the governor’s offer. “You must submit your undertaking in writing as we have to find a common ground for both parties”, he added. (NNI)