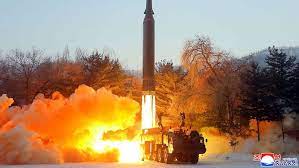 SEOUL (Reuters): North Korea fired two ballistic missiles toward the sea off its east coast on Friday, the South Korean military said, the latest in an unprecedented number of missile tests this year.

Coming only days after two other missiles were launched and just after allegations were made on Thursday the country is shipping munitions to Russian forces in Ukraine, the incident shows that North Korea does not intend to stop the provocative actions its neighbors say are destabilizing regional security.

Such launches are a “serious provocation that harms peace and stability” on the Korean peninsula and beyond and a clear violation of UN resolutions, the JCS said, urging an immediate halt.

Japan’s State Minister of Defense Toshiro Ino said his country has lodged a strong protest to North Korea through diplomatic channels in Beijing.

“North Korea’s rapid escalation of provocations in a series of actions threatens the peace and security of Japan’s region and the international community,” Matsuno told reporters.

The launch comes five days after the isolated country fired two mid-range missiles in what it called an “important” test for the spy satellite program it intends to complete by April.

The White House said on Thursday that North Korea completed an initial arms delivery of infantry rockets and missiles to a private Russian military company, the Wagner Group, to shore up Russian forces in Ukraine.

Tokyo Shimbun reported that North Korea had shipped artillery shells and other munitions to Russia by train last month, with additional shipments expected in coming weeks.

North Korea’s foreign ministry said it has never conducted arms transactions with Russia and criticized Washington for giving lethal weapons to Ukraine, with no mention of Wagner.