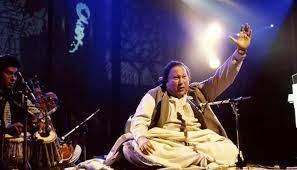 ISLAMABAD: An American magazine Rolling Stone recently made a list of 200 Best Singers of all time in which Pakistani legendary singer Nusrat Fateh Ali Khan was also featured.

Rolling Stone published the final list of all the best singers on Sunday.

He made her identity with his magical voice which won the hearts of many.

On the other hand, Indian legendary singer Lata Mangeshkar whose melodious voice is being listened not only in India but in Pakistan too, was also in the list of Rolling Stone’s 200 best singers of all time.

Magazine wrote for Lata: “The crystalline, eternally girlish voice of ‘the Melody Queen’ is a cornerstone of Indian pop music, with a global influence spread via Bollywood films, whose golden era she defined. Lata was the empress of playback singers, the vocal magicians who perform songs for actors to lip-sync in lavish movie musicals, recording over 7,000 such songs, by some estimates.”

The 91st singers were also in the list such as, K-pop boy band BTS Jungkook, South Korean singer-songwriter IU, and Canadian singer The Weeknd.