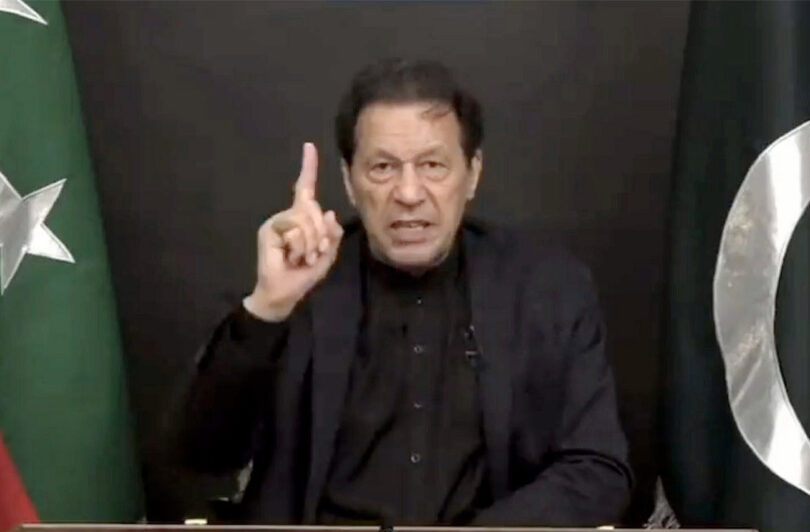 LAHORE (NNI): Former prime minister and Pakistan Tehreek-e-Insaf (PTI) Chairman Imran Khan has held responsible ‘one man’ for the ouster of his government, claiming that ‘one man’ was still behind the efforts to end party’s politics.
The former premier made these remarks while addressing the protestors, who had gathered outside the Punjab Governor House in Lahore to ‘bar’ Governor Baligh ur Rehman from taking any ‘unconstitutional’ step. Without naming anyone, Imran Khan said that one man’s decision toppled his government and that was the reason why the country plunged into political and economic crises. He lambasted the ‘one man’ over the ‘atrocities’ faced by PTI and its members and asked: “What was their fault. Only that we refused to accept the gang of thieves you imposed on us?”
The PTI Chief pointed out that the whole nation come out when his party was ousted. “It was giving one message that the imported government was unacceptable,” he added.
Imran Khan claimed that the ‘one man’ was still behind the efforts to end PTI’s politics. “When they saw that nothing was working out, they decided to kill me and remove me from the way,” he said, asking what more steps would be taken to force the nation to accept the imported government? He also lambasted the move of leaking ‘videos and audios’ on social media, saying that such things were being done to black mail his party.
At the outset of the address, Imran Khan lambasted the Pakistan Democratic Movement (PDM) for submitting a no-confidence motion submitted against Punjab Chief Minister (CM) Pervaiz Elahi.
He noted that the PDM’s were making attempts to not let him exercise his “constitutional right” of dissolving provincial assemblies. “Initially, the PML-N challenged us to dissolve the assemblies. But now, when we did that, a vote of confidence and no-trust motions were moved in the Punjab Assembly,” he regretted. The former prime minister pointed out that he wanted to dissolve the provincial assembles because they fear that if immediate elections are not held, the country will slip out of our hands.
He also criticised the coalition government for ‘running away’ from the elections, claiming that the ‘convict sitting abroad’ and Asif Zardari were scared. “They have a one-point agenda to hide their theft and they will hurt the country in the process. All they want is an NRO 2,” he alleged.
‘Elections the way out’
Imran Khan once again called upon the institutions to play role in holding immediate and transparent elections. He asked the institutions if they were not worried about where Pakistan was heading and its future.
“Are you not worried today that our country is heading towards a point where there will be no coming back,” he asked and then stressed that snap polls was the only solution.
The former premier noted that as soon as elections are held, the country would get a chance to get out of this mess. “Without political stability, there is no economic stability,” he concluded. Punjab Crisis
The political crisis in Punjab intensified after the Centre and the province came face-to-face over the no-trust voting against Punjab Chief Minister Pervaiz Elahi, PA speaker and deputy speaker.
The crisis deepened after the governor and PA speaker rejected each other’s rulings regarding the no-trust voting and summoning of a special session for vote of confidence today.
Pakistan Muslim League Nawaz (PML-N) and Pakistan People’s Party (PPP) submitted no-trust motion against Punjab chief minister, speaker and deputy speaker to the provincial assembly’s secretariat.
Confirming the development, PML-N leader Khawaja Imran Nazir has claimed that the opposition parties will give a good surprise to the people of Punjab.
He confirmed that the particulars related to the no-trust motion were received by the PA secretary. Nazir said that the no-confidence motion was submitted in accordance with the law after completing the required numbers. The development came after Imran Khan announced to dissolve Punjab and Khyber Pakhtunkhwa (KP) assemblies on December 23. The former premier announced the decision while addressing the nation alongside the Punjab and Khyber Pakhtunkhwa chief ministers, Pervaiz Elahi and Mahmood Khan, respectively. Imran Khan thanked the two provincial chiefs for their cooperation with his party, and said he had consulted PTI’s lawyers about the move, adding that the Constitution did not allow elections to be delayed beyond 90 days of an assembly’s dissolution.