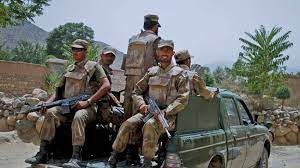 RAWALPINDI: A soldier of Pakistan Army embraced martyrdom on Saturday whereas four terrorists were killed by the Security Forces during an Intelligence Based Operation (IBO) conducted in general area Jani Khel, Bannu of Khyber Pakhtunkhwa province.

According to the Inter Services Public Relations (ISPR) news release, an intense fire exchange took place between own troops and terrorists during the conduct of the operation.

The Army troops effectively engaged the terrorists’ location. However, weapon and ammunition was also recovered from the killed terrorists who remained actively involved in terrorist activities against security forces and killing of innocent citizens.

The sanitization of the area was being carried out to eliminate any other terrorists found in the area. (APP)