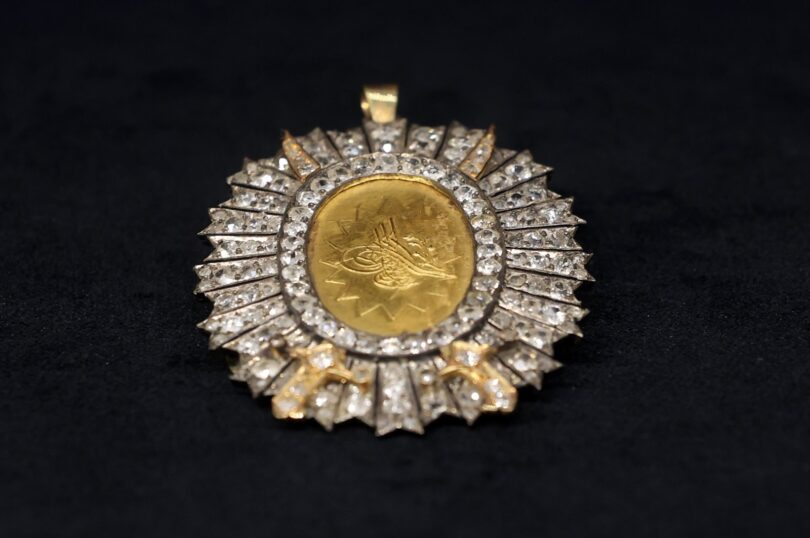 ISTANBUL (AA) : From Sultan Mehmed the Conqueror’s sultanic coin to the world’s first medal issued for women, a unique selection of copper, silver and gold medals detail the history of Türkiye in the ‘Might and Memory: Art of Power’ exhibition

The “Might and Memory: Art of Power” exhibition prepared within the scope of the 555th founding anniversary of the General Directorate of Mint and Stamp Printing House affiliated with the Ministry of Treasury and Finance sheds light on Turkish history starting from Anatolia, covering the Ottoman period and republic era.

The selection of the exhibition traces the transformations of Ottoman society and the reflections of historical and social events on coins, medals and insignia, unfurling the history of the mint, whose institutional structure was established during the reign of Fatih Sultan Mehmet, aka Sultan Mehmed the Conqueror.

The exhibition, which reflects the aesthetic understanding of the period in which the antiques were produced, is presented as a panorama from the past to the present with interactive applications and installations that introduce the duties and works of the mint.

Copper, silver and gold Ottoman coins from different periods were produced in wide geography, the first medal issued only for women in the world, the first coin of the Ottoman Empire, coins minted by Çelebi Mehmet and his brothers during the interregnum, coins minted by Cem Sultan, the important coins in history such as Sultan Mehmed’s sultanic coin, the order of medjidie and war of independence medal are among this unique selection.

Museum and exhibition specialist, also the curator of the exhibition, Hasan Mert Kaya, told Anadolu Agency (AA) that unique works from the mint collections were brought together.

Explaining that the exhibition emerged with a selection compiled from different periods displaying medals and coins, Kaya said: “It starts with the early Ottoman period and there are gold, silver and copper coins minted in different geographies that show the entire 600-year history of Ottoman coinage.”

Curator Kaya stated that the metal coins produced in different units and weights were needed with the changing and developing economic and commercial relations of the nation.

“There are large weighted silver Ottoman coins, which we call ‘zolta,’ used in trade with Europe. On the other hand, since they are the remnants of an empire that ruled three continents, these artifacts range from Algeria to Belgrade, Tunisia to Yerevan, and Ankara to Skopje. We brought together the most outstanding examples of all the coins produced over the centuries, minted in the geography where the Ottomans ruled,” he added.

Referring to the works of the republic period, Kaya said: “During the republic period, medals started to be produced. The ones with red ribbons were given to those who fought at the front, green given to the deputies, red and green for those who served both at the front and as deputies, and white ribbons to those who deployed in garrison. Service commendation and outstanding service medals, medal of honors were also displayed here.”

“In general, history always reaches today through intermediary sources from a historian’s history book. But the coins are different. Coins are like the newspaper of the period they belong to. Each one conveys the story of a period they witnessed, with the inscription and the figure. For this reason, coins are the unmediated witnesses of history, this made our exhibition significant,” he added.

Kaya also said that the works are put on display for visitors on certain days of the week in the permanent display area of ​​the General Directorate of the Mint and Stamp Printing House.