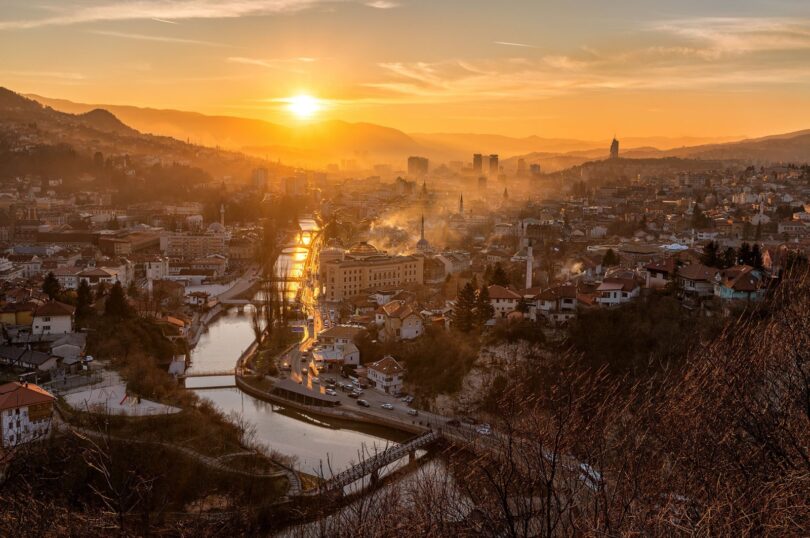 Let’s take a stroll in what some would call the Jerusalem of Europe, the heart of the Balkans filled with somber yet cheerful people, rich with historical texture and Ottoman heritage, the cosmopolitan capital of Bosnia-Herzegovina, Sarajevo

Sarajevo is the largest city of Bosnia-Herzegovina, as well as its capital. In truth, it is a small city in its own right, but it is packed dense with many places to visit and see. This sad historical city, which faced a devastating war in recent history and tried to cope with the pain of the war but never wanted it to be forgotten, gave us an unforgettable travel experience.

Visiting in December, we were worried about what kind of travel experience we would have in winter due to Sarajevo’s geographical location. We had been following the weather in the city for a week before our visit and when we arrived Sarajevo greeted us with snow. The wintery scenes we encountered in this city provided us with wonderful moments. Do not be afraid to go to any city in the Balkans in winter. It can be very nostalgic to visit a historical city blanketed by flaky snow.

Due to its cosmopolitan character and the coexistence of people from different religions, you can see a church, mosque and synagogue in the same garden in the city. In fact, it is actually known as the Jerusalem of Europe due to this feature. You can start your tour of Sarajevo with the famous historical Bascarsija. Apart from the places to visit in Bascarsija, which I described in my previous article, you can visit Ferhadija Street, where you will see another face of Sarajevo, and the structures on it, the Latin Bridge, the National Library, the Sarajevo Cathedral, Inat Kuca, the Muslim Cemetery and the Tunnel of Hope.

Since most of the places you will visit are within walking distance of each other, you can easily tour them all without a car.

Ferhadija street, which starts at the end of Bascarsija, is a street with cafes, restaurants and shopping stores. Unlike the cobblestone streets of Bascarsija, this place has a more modern structure. The Sacred Heart Cathedral, inspired by the Notre Dame Cathedral in Paris, is worth seeing.

In Sarajevo, where the scars of the war are seen everywhere, the roses filled with red resin, known as “Sarajevo Roses,” in the square in front of this cathedral represent the blood spilled in the war. The craters created by exploding mortars have also been filled with red resin. When you see these roses anywhere in Sarajevo, know that there was a lot of blood spilled during the war.

At the same time, there is another religious center on Ferhadija street: the Ferhadija Mosque, also known as Ferhad Pasha Mosque. The fact that this mosque and the Sacred Heart Cathedral are located on Ferhadiye street is proof that different religions live together in the city.

Also located at the end of Ferhadija street is a fire that burns day and night in the monument of Eternal flame, which was erected for the liberation of Bosnia during World War II. This fire, which was built in memory of military and civilian victims of World War II, was extinguished on our second day, probably due to heavy snow.

Sarajevo is the place where the event that supposedly caused the outbreak of World War I took place. The Latin Bridge in Sarajevo is the location where the Archduke Franz Ferdinand of Austria and his wife were killed, after which World War I erupted. Located over the Milijacka River, which runs through the middle of Sarajevo, this bridge is one of the best examples of Ottoman bridges in the Balkans.

The town hall, which was also used as a city court and council house throughout history, was converted into the National Library in 1949. Exposed to heavy fire during the war, important collections and nearly 2 million manuscripts were destroyed throughout the conflict. It draws attention with its magnificent appearance and color.

The Sarajevo Tunnel, also known as the Tunnel of Hope, was a tunnel constructed between March and June 1993 during the Siege of Sarajevo in the midst of the Bosnian War. The tunnel connected Bosnians to life for three years and is 800 meters (2,625 feet) long, 1 meter wide and 1.6 meters high. Food, war materials and humanitarian aid were delivered to the Bosnian army through this tunnel. At the same time, the evacuation of the civilian population was carried out from there. The tunnel was connected to Sarajevo International Airport, which was under the control of the United Nations at that time. The house, where the northern entrance of the tunnel is located and where its construction started, is now open to visitors as a war museum. In the museum, you can see photos of the construction of the tunnel and the items used in its construction, and you can even enter the first 20-meter section of the tunnel.

After seeing the museum sections, the 20-meter section below the ground we entered was the most impressive for us. I felt my breathing change as I walked through this narrow tunnel under the ground, where you had to bend down so that you wouldn’t hit your head. I thought about the fear experienced here during the war but also the courage, hunger, will and numerous other emotions. Despite everything, this tunnel tells a story of not giving up, fighting for the sake of saving one’s homeland and resistance. It is truly a must-visit place in Sarajevo.

This cemetery, which also houses the tomb of the late Alija Izetbegovic, the first president of independent Bosnia-Herzegovina, consists of two parts. One section hosts the graves of Bosnians killed during the Bosnian War between 1992 and 1995 and the older wing houses 15th-century Ottoman tombs.

Before he died, Izetbegovic stated in his will that he wanted to be buried next to the martyrs who fought for his country here. On his tombstone, which is located in a private area, the term “Servant of Allah” was used as an adjective instead of the title of president.

While I performed my prayers during the cemetery visit, I wanted to see what was written on the tombstones by cleaning the snow-covered writings of the tombstones with my hand. The dates of death on every tombstone that I cleaned with my cold hands were between 1992 and 1995, without exception. Although it is sad to see the graves of so many people who fought for their homeland without hesitation and fell as martyrs on the same dates, I respected how much they loved their country.

Kuca means house in Bosnian, and Inat – as it does in Turkish – means stubbornness: So, this is the House of Stubbornness. There is no one who does not know the stubbornness of the Balkan people. This house is actually a symbol of this situation.

The story of this house dates back to the 1860s. The Austro-Hungarian Empire, which ruled Sarajevo at that time, was building magnificent state buildings all over the city to show the power of the state. After constructing the post office, the national museum and the courthouse, they also decided to build a city hall. The empire set to work on the construction of a magnificent city hall on the banks of the Miljacka River. They decided to build this structure at the foot of the bridge over the Miljacka River. However, an obstacle arose in front of the entire empire: a Bosnian house owner who had a house right there and refused to let them demolish his home.

The house owner agreed to let them demolish his house for the construction of the city hall only on one condition: They had to rebuild his house exactly as it was on the opposite side of the river. Unable to find any other solution, the empire accepted the condition. They examined each part of the house and built the exact same house on the opposite bank of the river. So, the stubbornness of the Bosnian prevailed and his house is today known as Inat Kuca, the House of Stubbornness. The house is currently used as a restaurant. If you go, it is a place where you can try delicious Bosnian food.

To conclude, I would like to state that we visited Sarajevo with a guide and I would advise you to do the same because even a street in Sarajevo that seems to have nothing to offer turns out to have a story. We toured with a guide arranged by the hotel we stayed in. You can also make such a request from your accommodation in Sarajevo for a certain fee. In this sense, Isa Begovic Hamam Hotel where the only Ottoman bath in Sarajevo was converted into a hotel and where we stayed, is a place I can recommend.

Sarajevo is the sad child of the Balkans, in my opinion. While the bullet marks are still on the walls of the houses in Sarajevo and the Bosnian roses still remind you of the pain of war, its warm people, delicious cuisine and streets full of history will take you on an unforgettable journey.