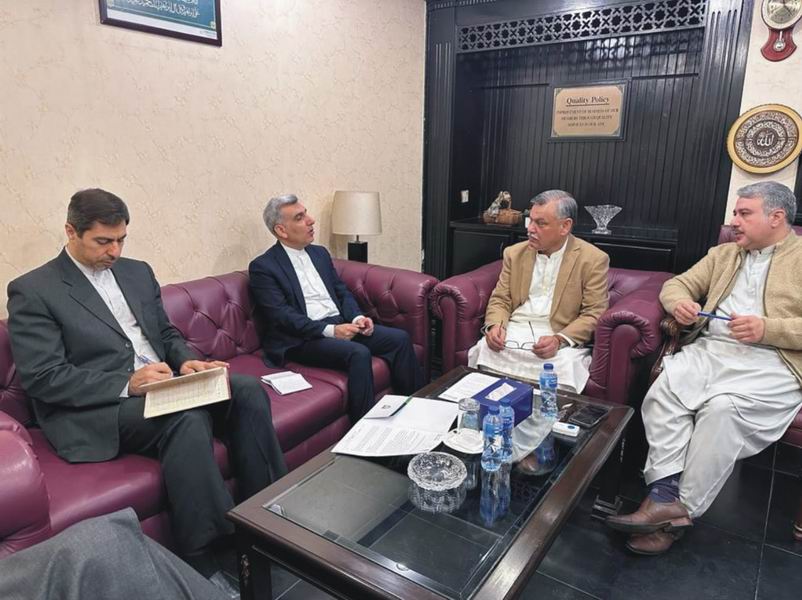 PESHAWAR: The Sarhad Chamber of Commerce and Industry president Muhammad Ishaq said enhancement of Pak-Iran bilateral trade and economic relations is imperative to stabilizing and strengthening the national economy.

He was talking to the Commercial Attaché of Iranian Consulate Karachi Mr Hossein Amini and acting Consul General of Iran in Peshawar Mr Hossein Mailki during a meeting here at the chamber’s house on Monday.

The meeting discussed Pak-Iran bilateral trade, holding of joint exhibitions, business to business meetings, and exchange of trade delegations and taking mutual benefits from each other’s experiences, hurdles in the way of mutual trade.
Ishaq mentioned that a comprehensive plan would be devised, through which efforts would be made to enhance bilateral trade between the two brotherly Islamic countries by exchanging business delegations, organizing trade exhibitions and taking mutual advantages from each other’s experiences.

Shahid Hussain, senior vice president and Ejaz Khan Afridi, vice president of the chamber were present during the meeting.
The chamber’s chief emphasized the need for removal of hurdles in the way of Pak-Iran bilateral trade, for which initiatives are needed to be taken at governments’ level.

SCCI is striving to boost up mutual trade and economic relations with brotherly Islamic countries, including Iran, Mr Ishaq remarked.
However, he underscored the need for pragmatic steps at government level to remove all those impediments that were hampering the bilateral trade between Pakistan and Iran.

Shahid Hussain, senior vice president of the SCCI while speaking on the occasion stated vast opportunities were available to further strengthen trade and economic relations between Pakistan and Iran. The senior office bearer said Khyber Pakhtunkhwa industrialists are ready to import raw materials from Iran.

However, he said traders’ communities have been faced with difficulties owing to imposition of global sanctions.
The SCCI SVP called for resolving of all issues and hurdles through proper procedures and mechanisms to boost up mutual Pak-Iran trade and economic ties.