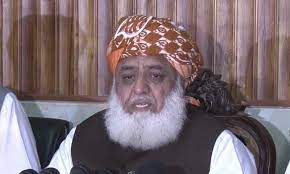 PESHAWAR (APP): PTI MNA Nasir Khan Musazai formally announced joining JUI-F along with his family, 30 Village Council Chairman and over 100 councilors here on Sunday.
The joining ceremony was held in the residence of Nasir Khan Musazai wherein former chairman Village Council Musazai, former general secretary PTI district Peshawar, Taimur Khan and Hamza Khan also announced their joining the JUI-F fold.
Besides, Maulana Fazalur Rehman, Opposition Leader in KP Assembly, Akram Khan Durrani, Senator Maulana Atta-ur-Rehman, Maulana Atta-ul-Haq Darwaish, Nasir Khan Musazai, Abdul Jalil Jan, Asif Iqbal Daudzai, Maulana Maskeen Shah, Khalid Waqar Chamkani and Ashraf Ali Marwat also addressed the joining ceremony.
Speaking on the occasion, JUI-F chief Maulana Fazalur Rehman congratulated Nasir Khan Musazai and his associates and welcomed them to his party fold.
He said “Pakhtuns can not support a political party whose leader is influenced by western culture, as it runs counter to our values and history.”
He said that the decision of the Nasir Khan Musazai to join JUI-F is not limited to an individual or family, rather the whole province is presently looking towards their party and awaiting their government in the province in near future.
Maulana Fazalur Rehman said that since last 15 years he is saying that the spirit, thinking and morality of the PTI affiliated people are representing the culture of the West. He said that they had competed Qadianiat, United States and Russia.
He said that he is talking of the protection of the belief of Pakhtuns and urged on them not to follow such a political party, which does not representing their customs and traditions.
He said that during the PTI government, the country was pushed towards economic bankruptcy and international friends of Pakistan saying that in case of the return of Imran Khan into power, they will not waste their investment. He also accused the PTI chief of spreading lie through fake social media IDs.
Maulana Fazal said that if PTI is the fate of Pakistan, then neither country will remain Islamic nor economic or moral and the very existence of the country would be at risk.