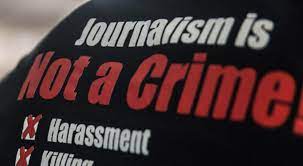 ISLAMABAD (AFP): Pakistan is the fifth most dangerous country for journalists as nearly 1,700 newsmen have been killed worldwide over the past 20 years, an average of more than 80 a year, according to an analysis published by Reporters Without Borders.

The two decades between 2003 and 2022 were “especially deadly decades for those in the service of the right to inform”, said the Paris-based media rights campaigners.

“Behind the figures, there are the faces, personalities, talent and commitment of those who have paid with their lives for their information gathering, their search for the truth and their passion for journalism,” RSF secretary-general Christophe Deloire said.

Iraq and Syria were the most dangerous countries to work as a journalist, accounting for “a combined total of 578 journalists killed in the past 20 years, or more than a third of the worldwide total”, RSF said.

This peak was “followed by a gradual fall and then historically low figures from 2019 onwards”.

But deaths increased again in 2022, in part because of the war in Ukraine. So far this year, 58 journalists have been killed doing their jobs, up from 51 in 2021.

Eight journalists have been killed in Ukraine since Russia invaded in February. This compares to a total of 12 media deaths there over the preceding 19 years.

Ukraine is currently the most dangerous country in Europe for the media, after Russia itself, where 25 journalists have been killed over the past 20 years.

“Since (President) Vladimir Putin took over, Russia has seen systematic attacks on press freedom -– including deadly ones –- as RSF has repeatedly reported.

“They include Anna Politkovskaya’s high-profile murder on 7 October 2006,” the rights group said.

Elsewhere in Europe, Turkey was ranked third most dangerous, followed by France “as a result of the massacre at the satirical weekly Charlie Hebdo in Paris in 2015”.

Reporters run the greatest risks worldwide in areas where armed conflict has occurred.

But, RSF stressed, “countries where no war is officially taking place are not necessarily safe for reporters and some of them are near the top of the list of those where killings have occurred.

“In fact, more journalists have been killed in ‘zones at peace’ than in ‘zones at war’ during the past two decades, in most cases because they were investigating organised crime and corruption.”

The Americas accounted for almost half of journalist murders, many in Mexico, Brazil, Colombia and Honduras.

“America is nowadays clearly the world’s most dangerous continent for the media,” RSF said.