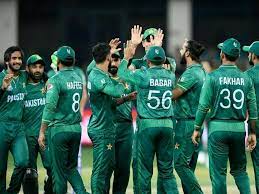 KARACHI: It is the year of the ICC Men’s Cricket World Cup and Pakistan are scheduled to play at least 11 One-Day Internationals and the ACC Asia Cup before the mega event.

They were locked on points with eventual runners-up New Zealand in the ICC Cricket World Cup 2019 at the end of the round robin but could not go through the last four because of a lower net run-rate. The Babar Azam-captained side would want to better that in the 2023 edition and that they have had a good form in 50-over cricket augurs well.

Pakistan have won all three series they played in 2022 against Australia, the West Indies and the Netherlands. They whitewashed the last two oppositions in Multan and Rotterdam, winning eight straight matches.

Their first ODI assignment is against the Kiwis from Monday as they play them in three matches, which are part of the ICC Men’s Cricket World Cup Super League. Though Pakistan are ranked sixth and New Zealand the second on the 13-team points table from which top seven sides and India secure automatic qualification, they are separated by only 10 points.

With top-ranked India at 139 points, if Pakistan are able to stretch their red-hot form with a series-cleaning streak and beat New Zealand 3-0, in what is their final series of the cycle, they would summit the table.

Babar Azam says, “It is the year of World Cup and we start our preparations for the tournament with this series. We are in good form in 50-over cricket and we want to ensure that we stretch it into 2023. Our ICC Men’s Cricket World Cup Super League did not begin as per the expectations but it was the team’s never-say-die attitude that has seen us to eight consecutive wins and a near-excellent ODI record in 2022.

“The conditions in India are going to be much similar to Pakistan so this is the right platform for us to test different combinations and see what clicks and what does not. I am sure the boys – at individual and collective levels – are raring to go and they will click as a unit.

Kane Williamson says, “Pakistan are always a strong side and very consistent in how they operate. We are looking forward to the challenge of playing them in their own backyard.

“There will definitely be a few differences [from the Test series] with the time of day we’ll be playing, might be some dew on offer and the two white balls in play. The cricket will be slightly different and we will look to adjust as quickly as possible.

“Naturally, there is going to be more one-day cricket in the schedule. It is going to be good tough cricket in conditions we may experience some similarities come the World Cup time. Thus, any opportunity to come out as a team and try and put together improved performances is a good opportunity.

The last time these two sides faced off was in the 2019 edition of the 50-over World Cup and it was Babar Azam’s sublime 101 not out that helped them to a commanding six-wicket win in Birmingham. Their previous bilateral series (in 2018 in the UAE) ended in 1-1 as the final match was washed out.