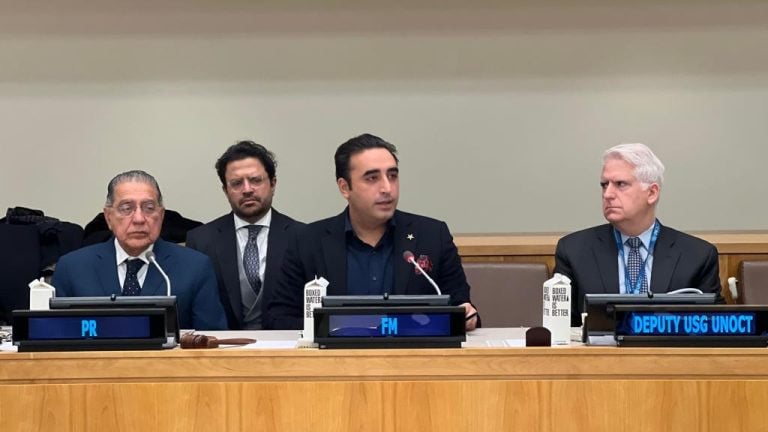 UNITED NATIONS (APP): Pakistan on Friday said that it would not tolerate cross-border terrorism by the Tehreek-e-Taliban Pakistan (TTP) or other terrorist groups and that the country reserved the right to take direct action against them.
“Pakistan will not tolerate such cross-border terrorism by the TTP or other terrorist groups, like the BLA, which are also receiving financial and other support from hostile quarters. We reserve the right to take direct action against them,” the foreign minister said addressing an event to commemorate the 8th anniversary of the terrorist attack on Army Public School in Peshawar held here at the UN Headquarters.
Hosted by Pakistan, the event was held as part of the UN’s Office of Counter Terrorism’s “Remembrance of the Victims of Terrorism” campaign.
Started with one-minute silence, the commemorative event brought together the UN member states, victims, experts, academics, civil society organizations and representative of law enforcement agencies.
In his address, the foreign minister said 132 children and eight teachers and staff at the School had died in that attack and several others were injured.
The attack was claimed by the so-called Tehrik-e-Taliban Pakistan (TTP), an entity listed as a terrorist organization by the Security Council and many Member States, he added.
“This terrorist attack was particularly heinous because the clear aim of the terrorists was to kill children. In this sense, it was a targeted attack designed to deal a grievous blow to the morale of the people of Pakistan.”
He told the gathering that instead, the shock of the APS massacre mobilized the Pakistani nation and motivated it to eliminate all terrorists from their soil as massive military operations were undertaken to cleanse the frontiers of the TTP and associated terrorist groups.
“Pakistan’s operations were successful. Our territory was cleared of terrorists. We paid a heavy price – 80,000 civilians and soldiers killed or injured and the economy set back by $120 billion,” he remarked.
However, Foreign Minister Bilawal said unfortunately the TTP and some other terrorist groups found “safe havens” and even more frequent attacks have been conducted against Pakistan’s military and civilian targets.
He said the brutal nature of the TTP, and its callous targeting of children in the APS attack, and other crimes should also reinforce the world community’s determination to combat and defeat the TTP, along with other terrorist organizations, like ISIL-K, operating in Afghanistan.
He told the participants that Pakistan’s intelligence agencies had “solid proof” of financial and organizational support and direction provided to the TTP.
“We have shared a comprehensive dossier with the Secretary-General and the Security Council containing concrete evidence of such external support to the TTP and other terrorist groups operating against Pakistan.”
The foreign minister said Pakistan had expected that the new authorities in Kabul would be able to convince or constrain the TTP from conducting cross-border terrorist attacks against Pakistan as they had promised to do in the Doha Agreement and in subsequent policy declarations.
“However, endeavours towards this end appear to have failed. The TTP seems to have been emboldened to declare a “war” against Pakistan. Its attacks have intensified.”
He expressed the hope that the remembrance of the APS attack would serve to mobilize the UN’s counter-terrorism machinery to address the threat of terrorism which presently emanated from Afghanistan and adjacent regions in a comprehensive and effective manner.
“We need to eliminate the “safe havens” of these terrorists; to cut off the sources of their financing and sponsorship; and to target and hold accountable individuals and entities responsible for the terrorist attacks or for sponsoring and financing such attacks,” he commented and assured Pakistan’s support to the UN and the international community in realizing the said objectives.
The foreign minister also read out the last word of APS Principal Tahira Qazi “They are my children and I am their mother” she uttered before being burnt alive by the terrorists in front of her pupils as she struggled to protect them.
He also showed the picture of a student Sher Shah Khattak who sacrificed his life while tryign to save his classmates.
The foreign minister told the gathering that he had also lost his mother in a terrorist attack carried out by the same terrorist organisation. Deputy Under-Secretary-General and Representative of United Nations Office of Counter Terrorism Raffi Gregorian said the APS attack had shocked the world.
He said there was no justification of attacking children particularly when they were there to learn.
He said the United Nations stood in solidarity with the victims and families whose lives were changed after the terror attacks.
He said the UN took multiple measures for the rights of terror victims like the observance of an annual day and adoption of two UN Assembly resolutions.
He said the member states needed to be more inclusive and make the victims’ associations part of the anti-terror efforts and strategies.
Among notable speakers included Ahmed Nawaz , a survivor of the APS terrorist attack, President of Oxford Union, Dr. Fatima Ali Haider, a therapist whose husband and son were killed in a sectarian incident in 2013. In the aftermath of Peshawar’s Army Public School massacre in December 2014, she co-founded The Grief Directory in 2015.
Other speakers included Sallie Lynch, Consultant for Tuesday’s Children and Muhammad Khalid Khan Khattak, Member-Policy on Counter Terrorism Extremism and Financial Terrorism of NACTA.
A short video was also played developed by the Pakistan Mission. Brochures were also distributed amongst the member states to apprise them of the horrific incident.
Ambassador Munir Akram, the Permanent Representative of Pakistan to the UN gave his concluding remarks and thanked the member states and other representatives for showing solidarity to the terror victims.