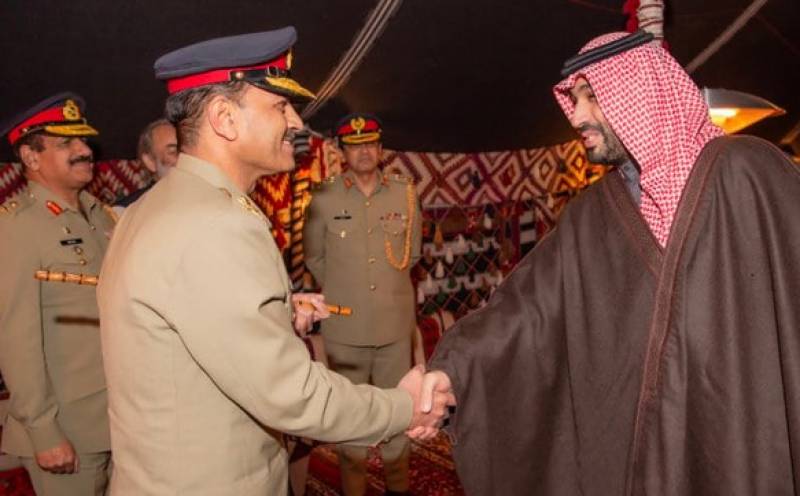 RIYADH (INP): Pakistan and Saudi Arabia on Monday agreed to bolster military-to-military and defence cooperation between the two countries. The agreement reached during a meeting between Chief of the Army Staff General Asim Munir with Saudi Crown Prince Mohammed bin Salman.
The Saudi Crown Prince received the Pakistani Army Chief in his royal tent in AlUla and congratulated him on become the Chief of Army Staff of Pakistan Army. The meeting discussed ways to develop bilateral relations in addition to issues of mutual interest and both the leaders agreed to further cement the relationship. Senior Saudi and Pakistani officials also attended the meeting.
Earlier, General Asim Munir had held talks with Saudi defence minister on his first official trip to the Gulf kingdom. General Munir had discussed military cooperation with Saudi Defence Minister Prince Khalid bin Salman bin Abdulaziz in the capital Riyadh on Thursday last, according to the Saudi Press Agency.
General Asim Munir, who took charge in November, has followed in the footsteps of his predecessors in visiting Saudi Arabia – a close defence and economically – on his maiden overseas trip. He will also visit the United Arab Emirates during the nearly one-week trip. General Asim Munir also visited Majid Al-Haram in Makkah where the doors of the Holy Kaaba were exclusively opened for him. In pictures and video clips posted on social media on Sunday, the army chief could be seen walking out of the Holy Kaaba at the Grand Mosque in Makkah.
Another video clip shared on social media showed Gen Asim Munir visiting the Masjid-e-Nabwi, as Saudi security personnel escorted the military commander.
The visit, first by Gen Asim as the army chief, comes at a crucial juncture when Pakistan is facing yet another balance of payments crisis. The country’s foreign reserves have come down to $5.8 billion, barely enough to cover one month of import bill. With the IMF programme hanging in the balance, Pakistan is hoping to secure another financial assistance package from Saudi Arabia and the UAE to avoid a default.