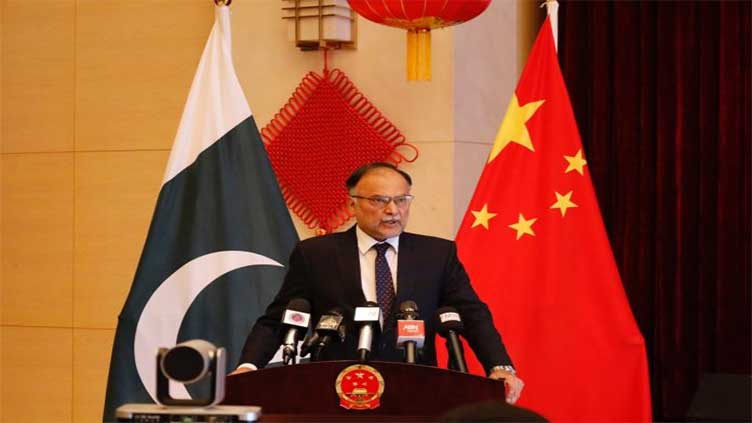 ISLAMABAD (APP): Federal Minister for Planning Development and Special Initiatives Professor Ahsan Iqbal on Friday said Pakistan should learn from China for economic and technological development.
To ensure economic development, the country should have a peaceful environment adding “we must first ensure political stability, continuity of policies, and social solidarity because economic development does not take place in an atmosphere of conflict and polarization.
The minister made these remarks while addressing the award ceremony held in recognition of outstanding Pakistani staff of the CPEC Projects 2022 at the Chinese Embassy here.
He said that everyone thought that CPEC is an impossible mission. But people on the ground made it possible, which is remarkable.
Highlighting the friendship bond between Pakistan and China, the minister said that the changes in world affairs have also brought changes in relationships. World orders bring countries together and the world order changes. The countries’ friendships also drift apart.
He said that the Pakistan and China friendship has defied all rules of international affairs and diplomacy. There are no two countries that have phrases like iron brothers, he added. All these phrases describe the depth and strength of Pakistan-China friendship and brotherhood.
The minister said that Pakistan and China were historically very close in political relations, security cooperation, and other fields except for economic cooperation.
However, in 2013 when Prime Minister Nawaz Sharif visited China after resuming office, the economic MoUs of $46 billion were signed between China and Pakistan to start work on the CPEC project.
The minister said that as a result of CPEC Pakistan overcome an electricity shortfall and communication infrastructure was improved.
He said that the purpose of CPEC was not to advance China’s business interests. The purpose of CPEC was to help Pakistan which was a close strategic partner, to improve its economy and bring Pakistan’s economy from an agricultural structure into an industrial structure. Ambassador of China to Pakistan Nong Rong while addressing the award winners said that in 2022, against the challenge of global economic downturn and historical floods in Pakistan, the CPEC projects have made good progress.
During this year, the CPEC has always been the highlight of our bilateral relations. On 2nd November, President Xi Jinping met with Prime Minister Shehbaz Sharif on his official visit to China. “Our two sides are committed to making full use of the JCC of the CPEC, advancing CPEC with greater efficiency, and making CPEC an exemplar of high-quality Belt and Road cooperation”, he added. The Ambassador further added that a series of good news are coming from different sectors under the CPEC umbrella. The China-aided Eastbay Expressway of Gwadar port has begun operation since June, enhancing connectivity of the port, which is now transporting two hundred thousand tons of fertilizer.
He said that Karot Hydropower started commercial operation in June as well, which provides cheap and clean electricity, and can reduce 3.5 million metric tons of carbon emissions annually. The Ambassador said that the TEL and Nova power plants in Thar also started operations with the local coal. The Shanghai Electric Thar coal-based power plant has been connected to the national grid. Six model farms under Pakistan-China Red Chilli Contract Farming Project are achieving a harvest in Punjab and Sindh Province, with an estimated yield of 700 tons of dried chilly.
This is just a portrayal of the great potential of agricultural cooperation between our two countries. Pakistan’s trade surplus of agricultural products for the year 2021 enjoyed an increase of 13 times. This year is expected to exceed a record high of US$ 1 billion. So far, CPEC has created 192,000 jobs, 6000MW of power supply, 510 km of highway, and 886 km of transmission line, which laid a solid foundation for Pakistan’s socio-economic development.
The achievements of the CPEC are not possible without the joint efforts of staff from both China and Pakistan.
He also informed that recently, China adjusted its COVID prevention and control policies, which include the removal of measures to control the number of international flights and restoration of people-to-people exchanges for business and study.
These will further promote the exchange of people, and facilitate investments between China and Pakistan. More Pakistani staff can take training programs in China. More students can go to China for further study, and come back to join the CPEC projects, the ambassador added.
It is hoped that the Chinese and Pakistani staff will cherish the opportunity, contribute to the construction of the CPEC with practical actions, and continue to consolidate the iron friendship between China and Pakistan, he concluded.