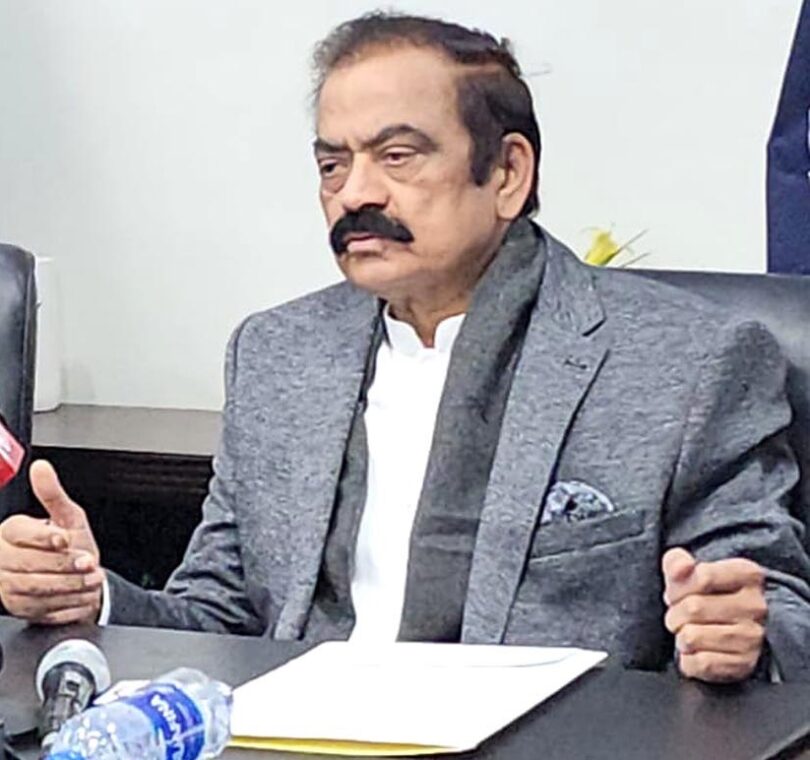 F.P. Report
ISLAMABAD: Minister for Interior Rana Sanaullah Khan on Wednesday handed over a cheque amounting to Rs10 million as compensation to the family of Police Head Constable Syed Adeel Hussain, who sacrificed his life in the line of duty by intercepting a suicide bomber in the Federal Capital’s I-10/4 Sector on December 23.
“Besides, the government will provide a housing unit to the family of its own choice, worth Rs 12.5 million, a full pension coupled with allowances to the martyr’s widow and bear educational expenses of the children, under the Prime Minister’s package,” the minister said while paying tribute to the martyred policeman here at a news conference.
He said the incumbent government had fully acknowledged the services and sacrifices of Islamabad Police, which was evident from the fact that it had paid arrears amounting to Rs 1.22 billion in ‘one go’ to the heirs/families of the martyrs, pending for many years. In addition, the minister said, the government had brought salaries, allowances and other facilities of the Islamabad Police personnel at par with the Punjab Police so that they could perform their duties in a more conducive environment with professional dedication.
“Now the Islamabad Police are performing their duties in a more professional way than ever. The timely and effective action of police officials did avert the Federal Capital from an eventual disaster on December 23.” Rana Sanaullah said he had issued directives that a Superintendent of Police (SP) would hold a weekly sitting with the heirs of martyrs to solve their problems on priority.
He said it was unfortunate that some elements wanted to fan terror in society by spreading fake security-related threats like the attack on the Parliament House through media. Such accused had been apprehended and were being investigated. “Details of the investigation will be shared with the media after its completion in due course of time.”
The minister said Shehbaz Sharif, as Punjab’s chief minister, had initiated the process to set up the Counter Terrorism Department (CTD) in the province, which had been proven effective in controlling terror incidents in the country. While condemning the recent attack on CTD officers in Khanewal, the minister said martyr Naveed Sadiq Sial had completed several daunting tasks during his duty.
“All the personnel of law enforcement agencies are playing their role in foiling terrorist attacks and their sacrifices for the motherland will not go in vain,” he added. Rana Sanaullah said it was decided in the National Security Council (NSC) meeting that there would be zero tolerance against the terrorists who wanted to destabilize the country.
All the institutions, he added, were working effectively to root out terrorism from the country and the nation should rest assured that terrorists would be dealt with iron hands. Regarding the terrorist attacks during the last year, the minister said around 67 percent incidents of terror had occurred in Khyber Pakhtunkhwa and 31 percent in Balochistan, wile only one percent took place in Punjab and two percent in Sindh.
Rana Sanaullah appreciated the role of CTD Punjab and said that all the CTDs of other provinces should put maximum efforts to prevent terrorist attacks. The minister assured that the Federal Government would provide maximum support and training especially to the CTDs of Khyber Pakhtunkhwa and Balochistan so that they could play their due role in curbing terrorism. He said the Afghan Government was a reality. Pakistan wanted the Tehreek-e-Taliban Pakistan (TTP) to surrender and efforts were underway to bring them on the negotiating table for the purpose, he added.