A slight breeze cut through the balmy heat as I surveyed the ancient city around me. Millions of red bricks formed walkways and wells, with entire neighbourhoods sprawled out in a grid-like fashion. An ancient Buddhist stupa towered over the time-worn streets, with a large communal pool complete with a wide staircase below. Somehow, only a handful of other people were here – I practically had the place all to myself.

I was about an hour outside of the dusty town of Larkana in southern Pakistan at the historical site of Mohenjo-daro. While today only ruins remain, 4,500 years ago this was not only one of the world’s earliest cities, but a thriving metropolis featuring highly advanced infrastructures.

Mohenjo-daro – which means “mound of the dead men” in Sindhi – was the largest city of the once-flourishing Indus Valley (also known as Harappan) Civilisation that ruled from north-east Afghanistan to north-west India during the Bronze Age. Believed to have been inhabited by at least 40,000 people, Mohenjo-daro prospered from 2500 to 1700 BCE.

“It was an urban centre that had social, cultural, economic and religious linkages with Mesopotamia and Egypt,” explained Irshad Ali Solangi, a local guide who is the third generation of his family to work at Mohenjo-daro.

But compared to the cities of Ancient Egypt and Mesopotamia, which thrived around the same time, few have heard of Mohenjo-daro. By 1700 BCE, it was abandoned, and to this day, no-one is sure exactly why the inhabitants left or where they went.

Archaeologists first came across the ancient city in 1911 after hearing reports of some brickwork in the area. However, the Archaeological Survey of India (ASI) dismissed the bricks as not having any kind of antiquity and the site remained undisturbed for several more years. It wasn’t until 1922 that R D Banerji, an ASI officer, believed he saw a buried stupa, a mound-like structure where Buddhists typically meditate. This led to large-scale excavations – most notably by British archaeologist Sir John Marshall – and the eventual naming of Mohenjo-daro as a Unesco World Heritage Site in 1980. The remains they uncovered revealed a level of urbanisation not previously seen in history, with Unesco lauding Mohenjo-daro as the “best preserved” ruin of the Indus Valley.

Perhaps the city’s most surprising feature was a sanitation system that was far beyond its contemporaries. While drainage and private toilets were seen in Egypt and Mesopotamia, they were luxuries of the rich. In Mohenjo-daro, concealed toilets and covered drains were everywhere. Since excavations began, more than 700 wells have been recovered, in addition to a system of private baths, including a 12m x 7m “Great Bath” for communal use. Incredibly, toilets were found in many private residences, and waste was covertly disposed of through a sophisticated, city-wide sewage system.

“It’s a complexity at a level of a city that we would want to live in today,” said Uzma Z Rizvi, an archaeologist and associate professor at Brooklyn’s Pratt Institute, who authored the 2011 essay Mohenjo-daro, The Body, and the Domestication of Waste.

The inhabitants of Mohenjo-daro also understood their environment. Since the city was located just west of the Indus River, they built impressive flooding defence platforms and drainage systems to protect themselves from annual floods. Moreover, they were key players in a sea-trade network that extended from Central Asia to the Middle East. For centuries, they produced intricately carved pieces of pottery, jewellery, figurines and other items that ended up everywhere from Mesopotamia to present-day Oman. 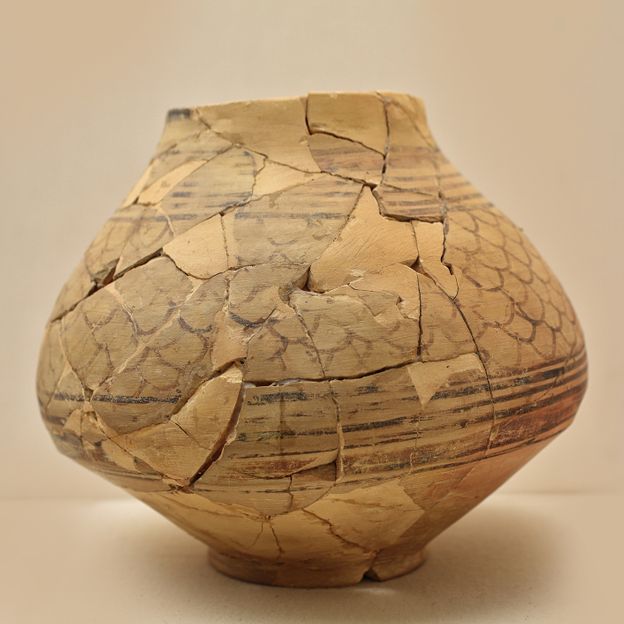 Today, the historical site has been turned into a local park, complete with picnic tables and shady, lush gardens. However, travellers from other parts of Pakistan rarely venture to this remote location, and foreign tourism is rare. I meandered about the ancient grid-like streets, taking in the many wells, the high walls that provided much-needed shade, and the covered drains – astounded that this was all engineered many millennia ago.

Mohenjo-daro’s ability to master the arts of sanitation and sewage disposal were not the only advanced features that set the inhabitants apart from other early civilisations. Archaeologists have noted the use of standardised building materials, despite a dearth of machines.

“All the bricks have a ratio of 4:2:1, even if they are not of the same shape,” Rizvi explained. “It’s important to recognise that all these bricks are following a sensibility of sorts. There’s a sense of what they want their city to look like. If you make everything to a ratio, even the spaces that you are walking through then inherently follow a certain sensibility of a ratio as well.”

The bricks – made from sun-drying and eventually kiln firing – have survived the elements for thousands of years. And while ostentatious architecture such as mansions, temples and other indicators of status are notably absent from Mohenjo-daro’s design, Rizvi explained that this does not mean that monumental architecture was non-existent. 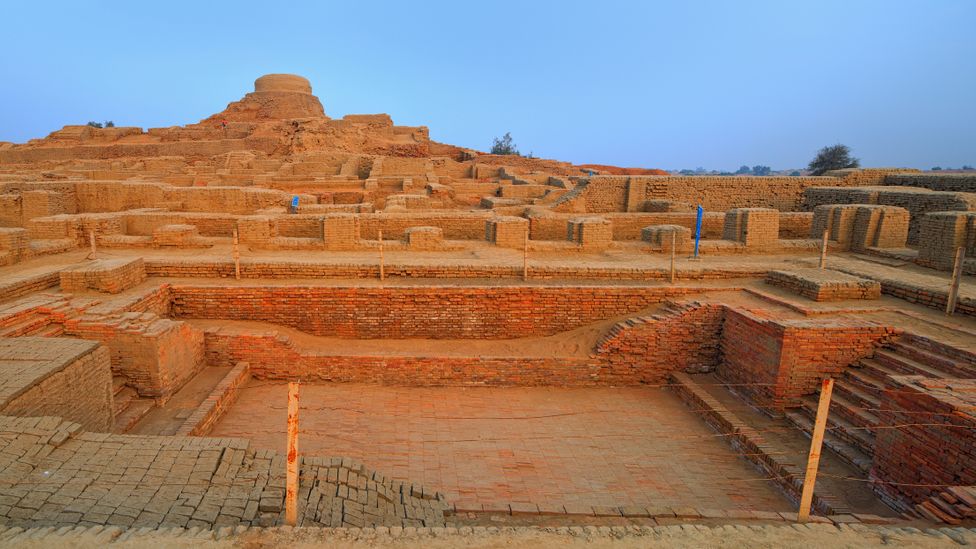 The 2.5m-deep Great Bath is one of the city’s most recognisable structures (Credit: Nadeem Khawar/Getty Images)

Crossing a brick-laden sidewalk that led away from the Upper City, I found myself in the Lower Town, which makes up the majority of Mohenjo-daro’s 300-plus hectares and housed the city’s thriving neighbourhoods. Organisation was the name of the game here. The dozens of relatively narrow streets spread out in a planned grid with perfect 90-degree angles. The doorways of local homes – including those in bathrooms – utilised thresholds not unlike what you’d find in any house or building today.

“When you see a threshold, you know that someone has thought about what it means to be inside and outside,” said Rizvi.

At the Mohenjo-daro Museum, a small building set in a grassy area of the complex, I got further insight into these inhabitants. Hundreds of decorative seals – often featuring a single animal – as well as figurines, jewellery, tools, toys and pieces of pottery have been successfully excavated from the site. Displayed on rows of glass shelves, the relics were remarkably well preserved.

When you see a threshold, you know that someone has thought about what it means to be inside and outside

Among the artefacts were two sculptures: one a young woman wearing jewellery and an intricate hairstyle; and the other a well-groomed man who appeared to be of high status. 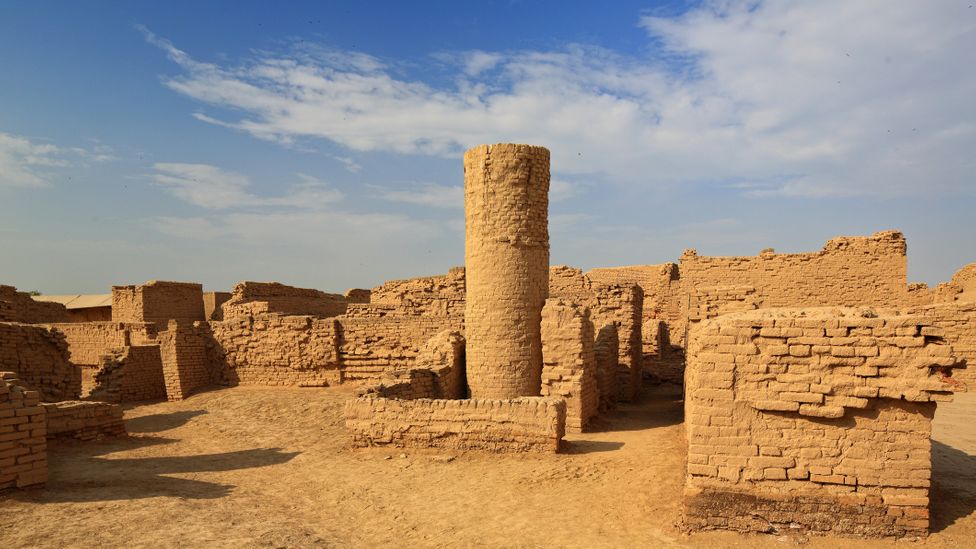 More than 700 wells have been uncovered since excavations began (Credit: Nadeem Khawar/Getty Images)

However, a major detail that could unlock far more about the lives and times of the inhabitants remains just out of reach.

While ancient writings often reveal the secrets of civilisations, this has not been the case with Mohenjo-daro, whose inhabitants used what’s known as the Indus Valley Script. “It was a pictographic language with more than 400 signs. It is still not decoded,” said my guide Solangi.

What exactly happened to Mohenjo-daro is another mystery yet to be solved.

Collectively, researchers are unsure why exactly the city came to be abandoned sometime around 1700 BCE, though it is widely believed that climate factors played a part. Even so, Rizvi explained, the disappearance of Mohenjo-daro was not an instantaneous one.

“The city itself did not suddenly evacuate. Around 1900 BCE, you see a shift happen, fewer traces of people living in the city start to emerge in the material record. It’s not that everyone is gone, but there are certain neighbourhoods that you begin to see in disrepair. These later time periods do not have the same density of population as earlier time periods. You see the slow movement of folks leaving the city,” she said.

Now, several thousand years later, the city is once again in danger after devastating super floods hit Pakistan in August 2022. Dr Asma Ibrahim, an archaeologist and museologist who’s been involved in preservation work all over the country, confirmed that while Mohenjo-daro had been damaged, the flooding to the site was less than archaeologists had originally feared. 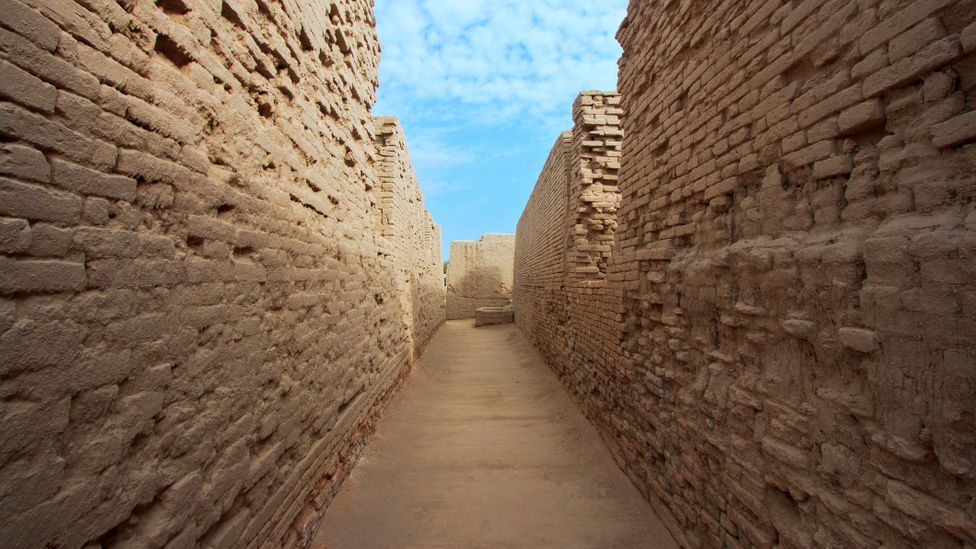 Many houses were two storeys high, with thick walls and high ceilings to keep the rooms cool in the hot summer months (Credit: Iqbal Khatri/Getty Images)

When asked about how Mohenjo-daro can be protected going forward, Ibrahim recommended the use of channels to divert excess water away from the site but stressed that “a long-term strategy” is needed.

A lasting plan for the area will not only benefit the archaeological site, but the many locals, like Solangi, who live in its vicinity. From Solangi’s home in Dandh village, the stupa is in clear view. “For me, Mohenjo-daro is a treasure of ancient civilisation. We must protect it for future generations,” he emphasised.

As I walked along the pathways, I agreed with Solangi’s description. I thought of the orderly streets and perfectly cut bricks. The in-ground pool known as the Great Bath. A wide-spread sanitation system that could outperform some of the infrastructures seen in Pakistan today.

And at least for a while, their investment paid off. Mohenjo-daro thrived, and the inhabitants were able to enjoy living standards far beyond the norms of their time.

Sitting in a clanky autorickshaw on the way back to Larkana some hours later, I couldn’t help but feel a sense of gratitude. For thousands of years, Mohenjo-daro was buried in dirt and sand, seemingly lost for good in the plains of Interior Sindh.

Yet, thanks to the tireless efforts over the past century of dedicated guides like Solangi and archaeologists, one of the most advanced cities of the ancient world can be walked through once more. And more often than not, you’ll get to have the neat, drain-lined streets all to yourself.