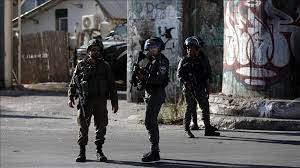 JERUSALEM (AFP): A teenage Palestinian girl was found shot dead on the roof of her house after an Israeli raid in the occupied West bank, official Palestinian sources said Monday.

Israel’s army said troops had exchanged fire with suspects in the area.

Without commenting specifically, the army said it was “aware of reports regarding a killed Palestinian female” and the incident “is under review”.

The Palestinian health ministry identified the girl as Jana Zakarna, who lived in Jenin, a city in the northern West Bank that is home to many militants and has been targeted by near daily Israeli operations since March.

The official Palestinian news agency, Wafa, said Zakarna, 16, was “shot in the head by Israeli soldiers while on the roof of her house.”

It said relatives found her there after troops left the area.

In a statement, the army said it had entered Jenin overnight Sunday-Monday “to apprehend wanted individuals” and that three people were arrested.

“Suspects hurled explosives and fired heavily at the soldiers. The soldiers responded with live fire towards the armed suspects,” the army said.

Three other Palestinians were wounded, according to the Palestinian Red Crescent.

Jenin has been the epicentre of surging West Bank violence this year. Israel has blamed militants in the city for a spate of deadly attacks targeting Israeli civilians and security personnel.

At least 150 Palestinians and 26 Israelis have been killed this year across Israel, the contested city of Jerusalem, and the West Bank.

Israel has occupied the West Bank since the 1967 Six-Day War.

The toll includes more than 40 Palestinians killed during Israeli operations in the Jenin area, among them children as young as 12 and veteran Palestinian-American journalist Shireen Abu Akleh as well as militants.