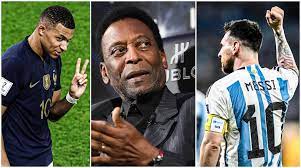 Brasília (Agencies): Brazilian legend Pele has congratulated Argentina and their superstar Lionel Messi for winning the 2022 FIFA World Cup and French star Kylian Mbappe for scoring four goals in the final. “Today, football continues to tell its story, as always, in an enthralling way,” the 82-year-old wrote on Instagram. “Messi winning his first World Cup, as his trajectory deserved.”

“Congratulations Argentina! Certainly Diego is smiling now,” he added, referring to the late Argentine football legend and his once greatest rival, Diego Armando Maradona. Pele also praised Mbappe. “My dear friend, Mbappe, scoring four goals in a final. What a gift it was to watch this spectacle to the future of our sport,” he wrote.

He also reserved special praise for Morocco, which became the first African nation to reach a World Cup semifinal. “And I couldn’t fail to congratulate Morocco for the incredible campaign. It’s great to see Africa shine,” Pele said. On Sunday, Argentina bagged their third FIFA World Cup title by beating France 4-2 on penalties, after 120 minutes ended with a 3-3 draw. Pele, who helped Brazil win three World Cups in 1958, 1962, and 1970, is Brazil’s leading scorer with 77 goals in 92 matches for his country and is regarded as one of the greatest footballers of all time.