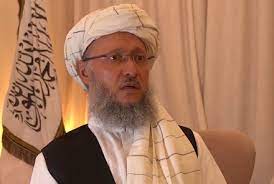 KABUL (Agencies): The Deputy Prime Minister of the Islamic Emirate of Afghanistan, in a meeting with the elders of Jawzjan, said that the Islamic Emirate will pay attention to the basic needs of the people in the next fiscal year’s budget.
The Deputy prime minister, Mawlavi Abdul Salam Hanafi, during his trip to the north of the country, visited Darzab district of Jawzjan.
Hanafi meeting with the scholars, elders and youth of the said district, at the Abdullah bin Masoud school of that district heard discussed their suggestions and problems, according to statement released by his office.
Hanafi assured the residents of Darzab that the Islamic Emirate will consider the basic needs of the people in addition to taking care of the families of the martyrs in the next fiscal year’s budget.