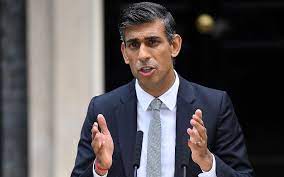 The leaders looked forward to working together to advance the UK-Israel relationship, including on trade where the UK is already Israel’s most important partner in Europe. They agreed the UK-Israel Free Trade Agreement, currently being negotiated, could unlock further opportunities for both our countries, building on our shared leadership in areas like technology and services.

The Prime Minister and Prime Minister Netanyahu also discussed cooperation between the UK and Israel on security issues, where both countries have an interest in promoting regional stability.

The Prime Minister outlined the steps the UK has taken to respond to abuses of human rights and breaches of international law by the Iranian regime, including sanctioning Iran for illegally supplying military drones to Russia. The Prime Minister thanked Prime Minister Netanyahu for his support to Ukraine.

The Prime Minister reaffirmed the UK’s longstanding position on the Middle East Peace Process. The leaders agreed that the Abraham Accords had the potential to bring about a permanent step change in relations between Israel and its neighbours, with far reaching benefits.

The leaders looked forward to meeting in person soon and to marking Israel’s 75th anniversary later this year.