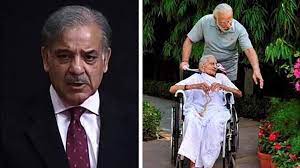 ISLAMABAD: Prime Minister Shehbaz Sharif has expressed his condolences on the sad demise of mother of his Indian counterpart Narendra Modi.

In a tweet uploaded on Friday, Shehbaz Sharif said there was no greater loss than losing one’s mother, offering his condolences to Indian Prime Minister Narendra Modi on the passing away of his mother.

Earlier, Narendra Modi’s mother Heeraben Modi has died at the age of 99.

“A glorious century rests at the feet of God,” Mr Modi tweeted on Friday morning.

He lit his mother’s funeral pyre in Gandhinagar in western Gujarat state – where Heeraben lived – on Friday.

Heeraben had been admitted to hospital on Wednesday after her health deteriorated. The Indian prime minister often visited his mother to seek her blessings on important occasions and festivals.

Her life and sacrifices had “shaped” his mind, personality and self-confidence, Mr Modi wrote on 18 June when Heeraben turned 99.

“My mother is as simple as she is extraordinary. Just like all mothers,” he wrote.

They were last seen together in public on 4 December when Mr Modi visited her house during the assembly election in Gujarat, his home state.

Heeraben lived with Mr Modi’s younger brother and his family.

Several politicians and ministers have expressed sorrow over her death on social media.

Defence minister Rajnath Singh tweeted that he was “deeply pained” by the news.

“The death of a mother leaves such a void in one’s life that is impossible to fill,” he wrote.

Heeraben was born in Visnagar in Gujarat’s Mehsana district in 1923. “Her childhood was one of poverty and deprivation,” Mr Modi wrote.

As a teen, she was married to Damodardas Mulchand Modi and moved to the town of Vadnagar a few kilometres away.

“In Vadnagar, our family used to stay in a tiny house which did not even have a window, let alone a luxury like a toilet or a bathroom,” Mr Modi wrote in his blog.

He described his mother as punctual, neat and a hard worker. “While working, she would hum her favourite bhajans and hymns,” he wrote.

Heeraben never attended public programmes, Mr Modi wrote, adding that she had only accompanied him to two events – the second one was in 2001, when he first took oath as the chief minister of Gujarat.

“Since then, she has never accompanied me to a single public event,” he wrote.

Though he became India’s prime minister in 2014, Heeraben visited him in Delhi only two years later. Mr Modi had tweeted photos of himself showing her around his official residence.

Months later, when Mr Modi’s government controversially banned 500 and 1,000 rupee notes in a bid to crack down on undeclared wealth, Heeraben was photographed visiting a bank, like millions of Indians, to exchange old notes.