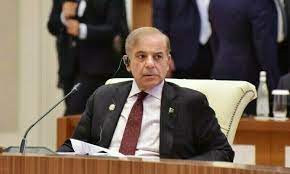 ISLAMABAD: Prime Minister Shehbaz Sharif has said that he was overwhelmed by the response of the international community at the Geneva conference where billions of dollars in aid were announced to help rebuild lives and infrastructure in Pakistan’s flood-ravaged areas.

In a tweet uploaded on Tuesday morning, the prime minister said “The world witnessed yesterday how the nations can come together in a show of solidarity to create a model of win-win partnership to lift suffering humanity out of tragedy.”

Shehbaz Sharif further said “I was deeply moved by the compassion on display at the Geneva Conference. Together we will rebuild lives and hopes.”

In another tweet, the prime minister said offered thanks to heads of state and government, European Union, Pakistan’s development partners and United Nations for making the Geneva conference a resounding success.

Shehbaz Sharif said the UN secretary general has shown stellar leadership all along and the people of Pakistan will forever remain grateful.

Foreign Office also released a statement highlighting the proceedings of the International Conference on Climate Resilient Pakistan while was held in Geneva.

Purpose of the conference

Co-hosted by the Government of Pakistan and the United Nations, the International Conference on Climate Resilient Pakistan took place on January 9, 2023, in Geneva, in the backdrop of the devastating floods in 2022.

The conference brought together the international community to reaffirm solidarity with Pakistan, to review the recovery needs of the affected population, and to identify support required to reconstruct and rehabilitate the damaged infrastructure in a resilient manner.

Since June 2022, a combination of heavy rains and riverine, urban, and flash flooding has led to an unprecedented natural disaster in Pakistan. Floods have affected 33 million people, with more than 1,730 lives lost as well as 2 million housing units impacted, and several thousands of schools and hospitals damaged or destroyed. Estimates suggest that the national poverty rate may increase, pushing an additional 9.1 million people below the poverty line. Existing health and food insecurities are exacerbated by the disaster, disproportionately affecting the most vulnerable.

The Government of Pakistan led a Post-Disaster Needs Assessment (PDNA), which was prepared with the support of a Core Group of partners comprising the Asian Development Bank, the European Union, United Nations Agencies, and the World Bank Group. The PDNA estimates recovery needs at over USD 16 billion.  Housing, agriculture and livestock, as well as transport and communication sectors were most impacted. Sindh was the province worst-affected by the disaster, followed by Balochistan, Khyber Pakhtunkhwa, and Punjab.

Based on the PDNA, the Core Group has supported the Government of Pakistan in developing a Resilient Recovery, Rehabilitation and Reconstruction Framework (4RF). The 4RF provides an overarching framework for planning, financing, implementing and monitoring Pakistan’s resilient recovery, rehabilitation and reconstruction efforts.

The conference provided an opportunity to present the 4RF, secure international support, and forge long-term partnerships for building Pakistan’s climate resilience and adaptation.

During the conference, delegations recalled their assistance to the immediate relief efforts and affirmed their support to the people of Pakistan for a resilient recovery, rehabilitation and reconstruction. Delegations expressed their solidarity and announced commitments of financial support to the realization of the objectives and priority areas outlined in the 4RF, as well as to ongoing humanitarian efforts. Taken as a whole these commitments totaled more than USD 9 billion, from both bilateral and multilateral partners. Further announcements for in-kind support were made by a number of delegations.

The conference marked the beginning of a structured process of support for Pakistan’s recovery, aligning humanitarian relief, early recovery with broader long-term sustainable development in a resilient manner.

The structured process of support for Pakistan’s resilient recovery will be based on the following elements: