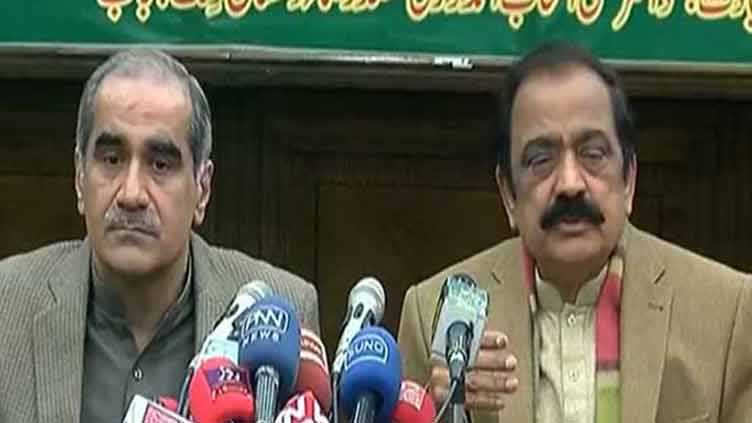 LAHORE: While rejecting the Lahore High Court order which restored Chaudhry Pervaiz Elahi as Punjab chief minister, the PML-N has decided to challenge the verdict.

The decision was taken during a PML-N meeting held in Lahore and chaired by Prime Minister Shehbaz Sharif on Saturday.

During the meeting, the PM was briefed that the PTI would not remain in power in Punjab next month.

The meeting deliberated on the situation that emerged after the restoration of Chaudhry Pervaiz Elahi as chief minister of Punjab by the Lahore High Court.

Prime Minister Shehbaz was also told that Elahi does not have the required number to pull through the vote of confidence.

During the meeting, Rana Sanaullah presented the initial report of the Islamabad bomb blast.

Addressing the presser, Saad Rafiq said that the LHC decision did not fulfil the requirements of justice. The court decision carries flaws, he added. He said that Elahi was given a sweet option by the court that if he opts, he could obtain vote of confidence.

The railways minister hinted that there are chances that the PML-N would challenge the LHC decision. He said no institution could condone the constitution. He said that the court has given the PTI-PMLQ-led Punjab government 18 days in which, it is feared that the horse trading might happen.

Rafiq said that the elected institutions should complete their constitutional term. He said that when the PDM-backed PML-N government took the reins of power, the country was on the verge of default.

“We defended state at the expense of our politics,” the railways minister said ruing that we carried the burden of Imran Khan’s sins on our shoulders.

He took a jibe at the PTI chief and his cronies saying they made a hullabaloo regarding assemblies’ dissolution. “But the truth is, Pervaiz Elahi does not have majority in the Punjab Assembly. After yesterday’s ruling of the LHC, now they should fulfil the legal and constitutional requirements and seek vote of confidence,” he added.

He prodded the PTI on KP Assembly issue saying if they want, they could dissolve provincial assembly there. “But these people want to pour debris only on Punjab. Nonetheless, the Punjab government is standing on the stay order only,” he jeered.

Rafiq remarked that terrorism is rearing its ugly head once again. He wanted the PTI to deliver in provinces which are under its control. He said Imran and his facilitators have unleashed destruction in the country.

He also criticized the PTI chairman who still wanted establishment to interfere in politics.

The railways minister was of the view that Imran was doing dirty politics.

Addressing the press, Interior Minister Rana Sanaullah said that the Lahore High Court’s order is just an interim relief, adding that the chief executive would have to seek vote of confidence.

Sanaullah said that it is the constitutional duty of the governor to ask the chief minister to seek vote of confidence. He said that assemblies are constitutional and democratic institutions, but they are being ridiculed.

Talking about the LHC order which restored Chaudhry Pervaiz Elahi as chief minister, he made it clear that it is an interim relief and not a permanent relief. He said the next 18 days, they (Punjab rulers) would loot public money.

He said government would not announce general elections, rather elections would be held in the province only whose assembly would be dissolved.

Sanaullah enunciated that there are some legal complications which could imperil the province.

He further said that if the government announced elections in 90 days then the country would have defaulted in just 45 days.

He lashed out at PTI Chief Imran Khan and his coterie saying they are accomplishing agenda of Pakistan’s enemies.

The interior minister said that his party has started preparation for the election in Punjab. But, he asked the chief minister to seek trust vote before dissolving assemblies.

He said that the Elehi-led Punjab government is enticing assembly members by doling out funds and money on them. He revealed that ‘we have got reports that they are offering Rs2 billion to the members’.

He went on to say that on the other hand, the CTD has not got their salaries for the past several months and the police department is also in shambles.

The interior minister hit out at the Khyber Pakhtunkhwa government saying that the KP rulers have been sitting in Zaman Park for the last 6-7 months.

PML-Q leader Tariq Bashir Cheema also spoke on the occasion. He said that during trust vote, things will become clear as how many people are with Elahi and how many support Ch Shujaat Hussain.