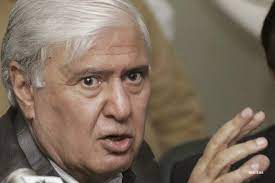 PESHAWAR: Qaumi Watan Party (QWP) Chairman Aftab Ahmad Khan Sherpao on Saturday said that all the political forces should work together to help steer the country out of the economic mess.

He was speaking at a meeting of QWP office-bearers from Upper Kohistan, Lower Kohistan and Kolai-Palas districts.
Jahanzeb Khan of Pakistan Muslim League-Nawaz and Mian Gul of Pakistan Tehreek-e-Insaf also announced joining the QWP on this occasion. Aftab Sherpao asked the government and the opposition to set aside their differences and join hands to address the challenges being faced by the country

He said political stability for necessary to improve the economic situation of the country. He maintained that holding the election would not address the prevailing crises.

Rejecting the demand of the Pakistan Tehreek-e-Insaf (PTI) leaders for the fresh elections, he said the Pakistan Democratic Movement-led government would complete the remaining tenure and the election would take place in its due time.
Aftab Sherpao said the incumbent federal government had inherited a weak economy from the PTI government therefore the economic revival would now take time.

The QWP leader said PTI Chairman Imran Khan was bent on creating anarchy to make the country go bankrupt. He said the former prime minister was responsible for the prevailing economic conditions, adding the PTI leader lacked the ability to govern and landed the country into a host of problems due to his incompetence.

He added the country would not default as the government was taking steps to improve the economy. He said that holding the fresh election was not the solutions to the ills the country was facing.

He said the provincial government had failed to safeguards the rights of the Khyber Pakhtunkhwa province. He added that law and order was deteriorating in the province, but the PTI government was least bothered to improve the situation.