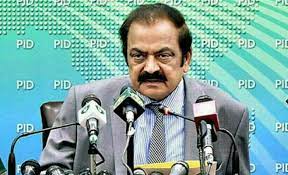 ISLAMABAD: Interior Minister Rana Sanaullah has emphasized for defusing the tense environment surrounding the conduct of local government elections in Karachi and Hyderabad on Sunday.

In a statement on Saturday, he said differences amongst the political parties on the holding of the local government elections have assumed a worrying situation. He warned that some miscreants can take advantage of the situation and the law and order situation may arise. As per details, the interior minister said expressed concerns on Karachi and Hyderabad local government elections.

Rana Sanaullah urged all the political parties to resolve the issue with reconciliation and dialogue. The election commission of Pakistan and the Judiciary should take notice of the current crisis. Earlier today, the Sindh government suggested the election commission of Pakistan (ECP) to postpone the LG polls in Karachi and Hyderabad amid security threats.