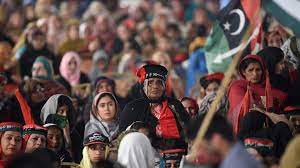 LARKANA (PPI): Pakistan People’s Party, District and City activists, took out a rally from their Kennedy Market office in solidarity with the Foreign Minister and PPP Chairman Bilawal Bhutto Zardari here on Sunday as per the announcement of its top leadership.
The participants also shouted slogans against the extremist BJP and its Modi government. District General Secretary Ijaz Ahmed Laghari, Khair Muhammad Sheikh and others who led the protest instead of their top leadership said while addressing the participants that we will not tolerate propaganda about Pakistan and Bilawal Bhutto Zardari in any way so BJP and Modi government should stop it.
They said that Bilawal Bhutto Zardari has shown a mirror of reality to the Modi government in the United Nations, after which the real face of India has been exposed in front of the whole world.
They said that they want to tell the BJP, which is demanding an apology from Bilawal Bhutto Zardari and shouting slogans against Pakistan, that the Modi government, which pardoned terrorists in India and massacred Muslims in Kashmir, should apologize from the platform of the United Nations and stop brutality in Kashmir.
They said that with Bilawal Bhutto Zardari’s open stance on Kashmir and Indian Prime Minister Narendra Modi, the BJP and Modi government have cried out and the people of Pakistan will not remain silent on the propaganda about the country and its foreign minister. They said that the Modi government should avoid false propaganda against Bilawal Bhutto Zardari, otherwise there will be protests against the Modi government and BJP not only in Pakistan but also in other countries. PPP activists of Naundero also took out a rally separately here where they demanded an apology from Indian rulers.
Students from various districtss visit Mohenjo Daro: The male and female students of various schools visited the world heritage ancient site of Mohenjo Daro near Larkana on Sunday ahead of winter vacations.
The students belonged to the schools of Larkana, Jacobabad, Khairpur Mirs, Hyderabad, Sukkur. The buses carrying male and female students from these cities started coming with jubilation.
Hundreds of students from Nusrat Bhutto School, KM School, Shah Latif School, Qazi Abdul Waheed School and others, and also colleges visited different parts of the most historical site of Sindh where they visited Stupa, DK Area, Tourist Park, Bath Side, museum and other areas and parts of the historical monuments.
The students also expressed their keen interest and happiness in the monuments to see the historical events in the museum, five thousand years old idols, hearts, beads, jewelry, necklaces, chariots, boats, artifacts, oxen carts, and so forth.
Students Allah Bakhsh Chandio, Mazhar Ali Abbasi, Iftekhar Sandano, and Fatah Abbasi while talking to media persons said that the charging of entry tickets, parking tickets and hotel charges for tourists coming from far-flung areas should be abolished forthwith. The best restaurants and hotels should be established and drinking water facilities must also be provided so that the visitors do not feel any difficulty.