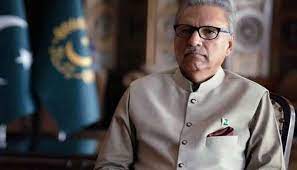 ISLAMABAD: President Dr Arif Alvi clarified on Monday that his statement about alleged help extended by former chief of army staff (COAS) Qamar Javed Bajwa and his team to the Pakistan Tehreek-e-Insaf (PTI) in the Senate and elections was taken out of reference.

The president, in a statement on Twitter, said the statement was being quoted out of context and was twisted and self-concocted.

Earlier, it was reported that President Dr Arif Alvi had said retired Gen Qamar Javed Bajwa did help PTI Chairman Imran Khan in the elections and later in Senate. The reports said the president, in a conversation with journalists and leaders of the business community, remarked that if the army had decided to stay away from politics, it’s time politicians took charge of the situation and created a situation where they didn’t have to depend on the army.

Responding to a question, the president said the ties between the PTI chief and retired Gen Bajwa soured probably in October 2021 and then again in April or May this year.

However, Mr Alvi stressed that the country was facing difficult times and urged all sides to let go of the past and forgive people for the mistakes they had committed earlier for a new beginning. The president also revealed that he had verbally suggested to the government as well as the opposition that a middle ground might be found and elections could be held at the end of April or in May; however, the date of the next elections was not certain.

Dr Alvi said Imran Khan should be worried about whether elections would be held even in October next year. He lauded Foreign Minister Bilawal Bhutto’s response to India and remarked that the minister had done the right thing. He said the world and the global order were based on vested interests. “A good reply was given by Bilawal Sahib,” he stated.