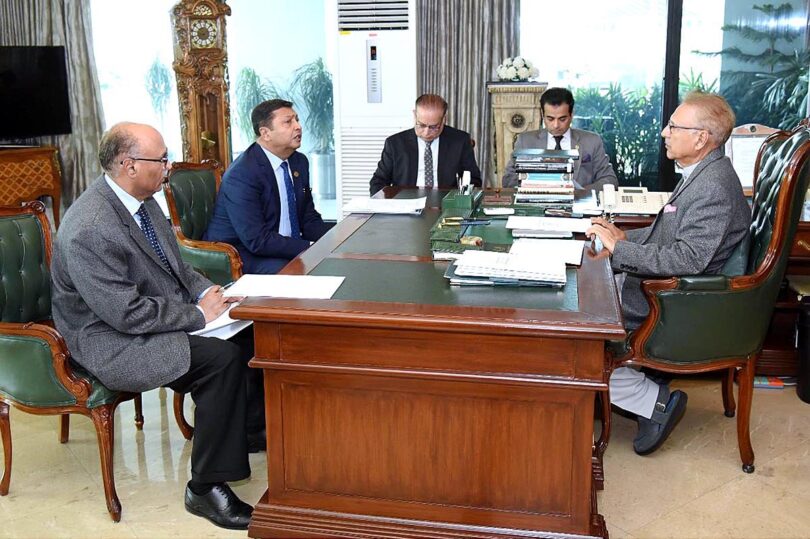 ISLAMABAD (PPI): President Dr Arif Alvi has asked COMSTECH to offer online and recorded education to students in Afghanistan, adding that recorded lessons and training modules could be a useful instrument to impart education to Afghan students, both male and female.
The President expressed these views while talking to the Coordinator-General of the Ministerial Standing Committee on Scientific and Technological Cooperation of the OIC (COMSTECH), Professor Dr Iqbal Choudhary, who called on him, here at Aiwan-e-Sadr, on Wednesday. Talking to the Coordinator-General, the President said Pakistan could also offer educational modules and online education services through the Virtual University of Pakistan and Allama Iqbal Open University to provide Afghanistan with effective means for imparting higher education.
He added that this arrangement was the cheapest, most cost-effective and high-quality, and could help fill the shortage of education facilities currently being faced by Afghanistan. The President underlined the need to benchmark best practices in science and agriculture sectors in other Islamic countries and replicate them in Pakistan.
He said Prime Minister’s Digital Skills Program in Pakistan was a successful model of imparting digital skills to youth, irrespective of their educational backgrounds and skill level, and enabling them to earn gainful employment. He stated that this program could be replicated in other Muslim countries where there was a demand for such skill development programmes.
The President said that the proposal to hold the 16th General Assembly Meeting of COMSTECH in the 2nd half of 2023 should be explored. He appreciated various initiatives taken by COMSTECH in many Muslim countries for the provision of skills to the students and providing health facilities in less developed countries.
The President appreciated the award of 20 fellowships/ scholarships to students of Kazakhstan through the Association of Private Sector Higher Education Institutions and Universities in Social Sciences of Pakistan in collaboration with COMSTECH. He also appreciated that COMSTECH had launched 500 exclusive scholarships/fellowships (undergraduate, graduate, research visits, workshop participations etc.) for the students of the State of Palestine.
The President appreciated COMSTECH for the establishment of the Islamic World Academy of Sciences, Amman, Jordan, the establishment of 13 COMSTECH Inter-Islamic S&T Networks in various fields of Science and Technology, the establishment of Network of Academies of Sciences in the countries of the OIC (NASIC), Islamabad, Pakistan, the establishment of Computer Training Centre, Khartoum, Sudan, the establishment of Computer Training Centre, Male, Maldives, the establishment of COMSTECH-ISESCO National Computer Training Centre, Freetown, Sierra Leone and the establishment of COMSTECH-COMSATS-MTM Information Technology Centre, Karachi.
President lauds security forces on successful Bannu operation against militants: President Dr Arif Alvi on Wednesday lauded the security forces for carrying out a successful operation against terrorists in Bannu and expressed resolve to eliminate terrorism from the country’s soil.
The president in a statement termed the success a result of the professionalism of security forces and their unwavering commitment against terrorism.
He said the nation would always remember the sacrifices made against terrorism for national defence and security.
The entire nation, he said, stands with its brave security forces on operations against terrorists.
President Alvi paid tribute to the officials of the armed forces who were martyred during the operation. He prayed for the speedy recovery of the injured officials.