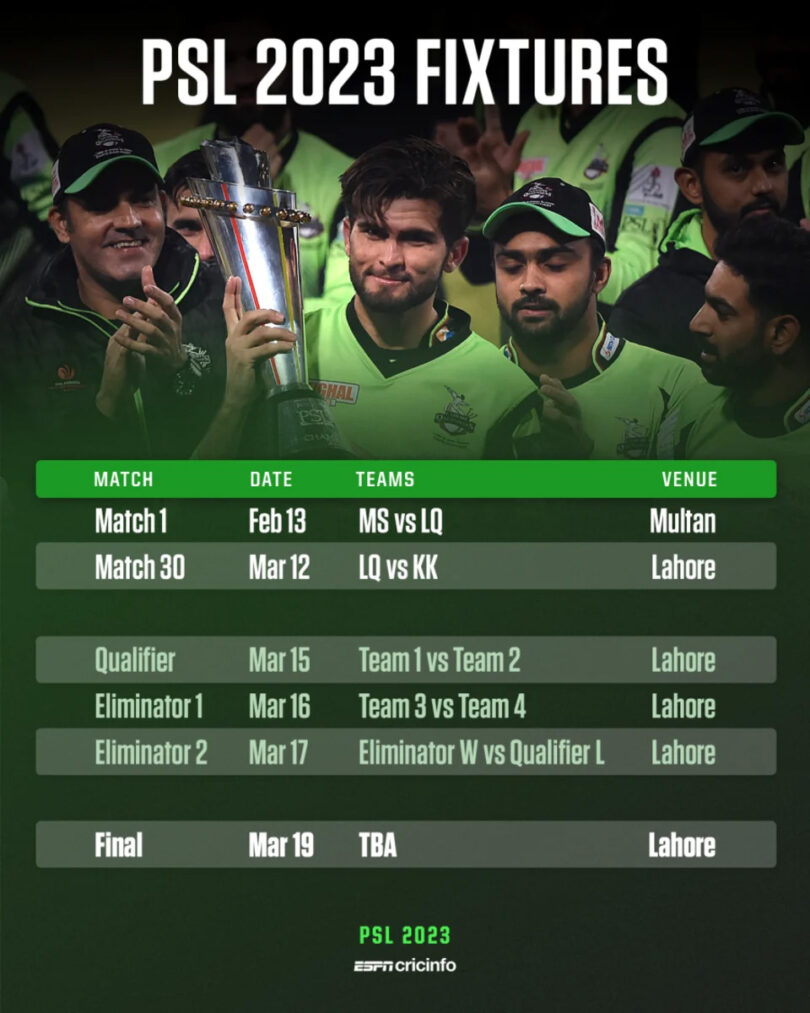 LAHORE (Cricinfo): Rawalpindi will host the most number of games in PSL 2023, which gets underway on February 13 in Multan with a contest between Multan Sultans and Lahore Qalandars, the defending champions.
A total of 11 matches will be played in Rawalpindi, while Karachi (nine), Lahore (nine) and Multan (five) will host the remaining games. The final, on March 19, as well as the playoffs prior to it, will all be played in Lahore. Three women’s “festival games” have also been slotted midway into the PSL – in Rawalpindi on March 8, 10 and 11 – involving local and overseas players in what will be a case of the PCB testing the waters ahead of a full-fledged women’s T20 league in the future. These will all be day games and be part of double-headers, with men’s PSL games to follow in the evening. The PCB earlier had plans to have the inaugural women’s league run concurrently to the men’s PSL, but that was shelved. As things stand, the aim is to launch a standalone project in later this year. The new league – which will bear a different name – shall have four teams.
This season marks a return to four venues for the league after it was restricted to two centres in the past two seasons because of Covid-19. Najam Sethi, head of the PCB’s new management committee, had earlier said that Quetta would be included in the list of venues for the first time, but the city has been omitted from the fixtures’ list released on Friday. Sethi, addressing a press meet, said “logistical concerns” had led to a change of plans for the PCB.
It would have been the first time as a PSL venue for Quetta – the capital of Balochistan, Pakistan’s least populous province but its largest by area – after the city staged its only ODI back in 1996, a three-wicket Pakistan win over Zimbabwe.
Quetta has hosted domestic cricket since 1954 but has often been neglected because of a lack of infrastructure and the security situation over the years. Cricket has not been as popular in Balochistan compared to other regions of Pakistan, historically, and only one player from the province, Shoaib Khan, has represented Pakistan. He played four T20Is during a quadrangular in Canada in 2008.
“The PSL will be a massive event for the PCB, taking place at the four iconic venues with the world’s best T20 cricketers in action,” Sethi said. “We aim to make the league bigger, better and stronger than ever before with the overarching ambition to make it the first-choice event for leading T20 cricketers. Each of the six sides will enter the PSL 8 with lots at stake.”
The PSL schedule was put in place in December, before Sethi replaced Ramiz Raja at the helm of the PCB, and the new PCB management hasn’t made any major change to it. There was a suggestion that the opening ceremony be moved out of Multan and be held in Karachi, but that hasn’t happened. The only tweak is that Qalandars, who had back-to-back games on February 19 and 20, will now play the games on February 19 and 21, with the original February 21 game between Quetta Gladiators and Peshawar Zalmi now taking place on February 20.
The schedule has been designed to allow four sides (Qalandars, Sultans, Karachi Kings and Islamabad United) to play five matches each in front of their supporters, one against each of the other teams. Quetta and Peshawar won’t have any home games since their home venues are not ready to host high profile games, but the plan is to get them ready by PSL 2024.