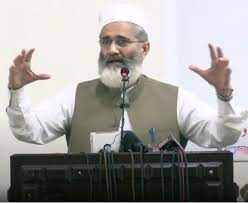 The function was attended by leaders of various teachers’ organizations, area elders and students. The speakers lauded the services of the retiring teachers’ leader Muhammad Shah and said that he had several achievements for his community on his credit.

Sirajul Haq said that Syed Muhammad Shah Bacha had served all the civil servants of the country selflessly and without any discrimination. He said that due to his continuous efforts and selfless service, the salary of government employees of the province were increased by thousands of rupees. He paid tribute to the retiring teacher and expressed a hope that he would not hesitate to make any sacrifice to serve the humanity in the future.

Later addressing another gathering at Anwarabad and talking to the media the JI chief said the rigged election would never resolve the issues faced by the nation. He said that electoral reforms were necessary before holding the next general elections in the country. He said that a specific quota in the national assembly should be reserved for the overseas. He said that a total of 18.44 overseas had no right to vote. He said the JI was in the favour of their voting.

The JI chief said that all the major political parties lacked democracy as none of them held intra-party elections. He said the PML-N, PPP, PTI and others were led by dictators. He said there was no difference in the policies of the PDM and PTI and they were alike. He said the PTI had been in power in Khyber Pakhtunkhwa for the last ten years but still the people faced many problems. The gathering was also addressed by former MNA Sahibzada Yaqub Khan, former MPAs Saeed Gul, Izazul Mulk, JI overseas president Imtiaz Khan and others.