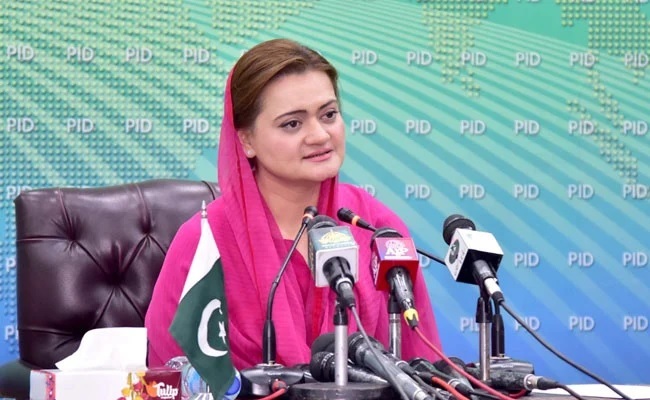 ISLAMABAD (APP): Minister for Information and Broadcasting Marriyum Aurangzeb said on Monday that Pakistan Tehreek-e-Insaf (PTI) was not a political party but a gang of ‘propaganda group’ led by former prime minister Imran Khan, a mentally ill person.
Speaking on a point of order in National Assembly, she said PTI can’t be a political party due to its fascist approach. The focus of the gang, who ruled the country from the year 2018 to 2022, was to incarcerate political opponents after registering fake cases against them. Imran during his (mis) rule had destroyed the country’s economy, sabotaged China Pakistan Economic corridor (CPEC) and closed power production projects of 14,000 mw initiated by former Prime Minister Nawaz Sharif.
She said PTI government registered narcotics case against Interior Minister Rana Sanaullah, alleging that Rana was the member of international gang of smugglers. Paying tributes to Rana Sanaullah, she said Rana was kept in death cell of jail sans giving him even proper mattress for sleeping. Various methods were used to tease Rana Sanaullah including releasing of ants in his cell. In the same House, she recalled former ministers alleged that Prime Minister Shehbaz Sharif had devoured the money donated by UK government for earthquake victims. Interestingly Shehbaz was not the chief minister when the money was received from United Kingdom. The main aim behind such propaganda was to impede foreign investment in Pakistan. The unconditional apology by the British publication Daily Mail was a vindication of the 220 million Pakistanis, which also thwarted an anti-state conspiracy hatched by Imran Khan and his cronies. National Crime Agency of UK has given clean chit to Sharif family, she said adding that PTI failed to prove allegations against Prime Minister Shehbaz Sharif.
Daily Mail also got nine adjournments in the defamation case against Shehbaz Sharif. She wondered that Imran, who was responsible for pushing the country to economic default was blaming the incumbent government for economic turmoil. Imran did not turn up to flood hit areas of Punjab and Khyber Pakhtunkhwa despite enjoying powers in these provinces. She categorically said that the next general elections would be held in October 2023.
Meanwhile, Minister for Information and Broadcasting Marriyum Aurangzeb on Monday said Pakistan Tehreek-e-Insaf (PTI) Chairman Imran Khan did not want the economy to stabilise and for that he desired riots, chaos and anarchy in the country. Reacting to Imran Khan’s video statement, she said the situation was the worst, but it was not for the country rather for Imran Khan whose “crutches have been broken.” He was worried that the institutions were not becoming part of his dirty politics. “The umpires whom he called animals” were neutral, the minister added. Marriyum said the “incompetent and inefficient” person, who had stolen the Toshakhana gifts, was out of his habit dragging the national institutions into his “unholy politics”.
She pleaded that it was the responsibility of the Election Commission of Pakistan and the judiciary to hold the “foreign agent” accountable for his wrongdoings, including the Toshakhana theft. The minister said the traders, the business community, and the farmers were fully aware that the country was caught in the vortex of economic collapse caused by the Imran Khan regime.
“The PTI leader is an insane person who thinks that the whole of Pakistan is crazy,” she added. The minister said the incumbent government was bringing the country back from the bankruptcy where it was left by the PTI government. Imran Khan would have to be accountable for the looted public money and land taken in bribe, stolen diamonds, theft of Toshakhana gifts and illegal foreign funding, she said. He would also have to answer for his four-year misrule which resulted in economic collapse, unemployment and inflation, the minister added. She said Imran Khan might continue making a hue and cry, but no one would come to his rescue as the institutions were no more part of his conspiracies.