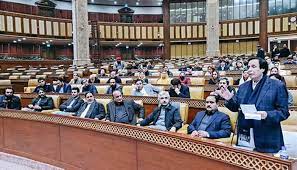 LAHORE: The Punjab Assembly has been dissolved after the governor, Baligh Ur Rehman, refused to sign on the summary sent for disbanding the legislative, sources said Saturday.

A notification from the governor, for the appointment of the caretaker chief minister was dispatched to Punjab Chief Minister Parvez Elahi and Leader of the Opposition in the PA Hamza Shahbaz. It said the PA and provincial cabinet stood dissolved under Article 112(1) of the Constitution.

According to Article 112(1), the assembly stands automatically “dissolved at the expiration of forty-eight hours after the chief minister has so advised” if the governor does not do it. The notification said that the caretaker CM would be appointed by the governor in consultation with the two leaders. The governor called on them to provide the names of their nominees for the position by 10:10pm on January 17 (Tuesday).

The governor said that he remained available for the discharge of his constitutional duties if the two desired to call on him or have a meeting between the three. Rehman earlier said after distancing himself from the dissolution process that he would “rather let the Constitution and law take its own course”.

“Doing so will not hamper any legal process as Constitution clearly provides a way forward,” he tweeted. Punjab Chief Minister Parvez Elahi had forwarded the summary of dissolution on Thursday, and as per the constitution, the assembly dissolves within 48 hours regardless of the governor’s decision. Rehman — a leader of the Pakistan Muslim League-Nawaz (PML-N) —refrained from the dissolution process and decided to let the constitution take its course.

“I have decided not to become part of the process leading to the dissolution of Punjab Assembly. I would rather let the Constitution and law take its own course.” “Doing so will not hamper any legal process as Constitution clearly provides a way forward,” the governor — who had earlier termed the assembly’s a “hard one” — said. Pakistan Teheek-e-Insaf (PTI) Chairman Imran Khan had announced the dissolution of the assemblies — Khyber Pakhtunkhwa and Punjab — in November last year.