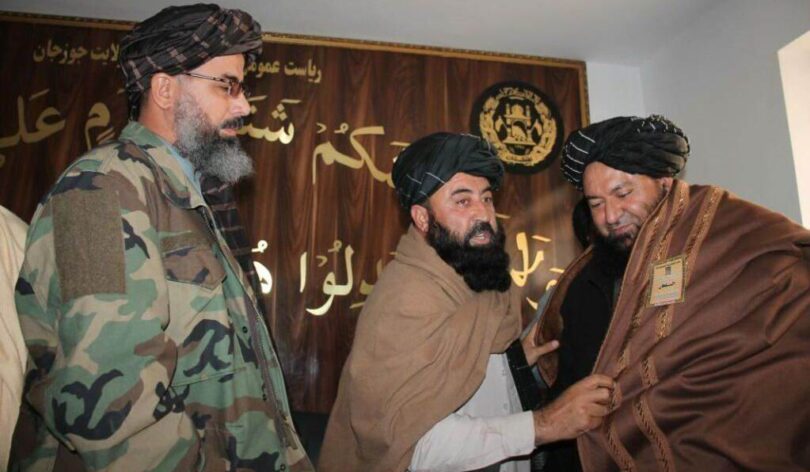 SHIBERGHAN (Pajhwok): Jawzjan Deputy Governor Mawlavi Gul Mohammad has pardoned the murderer of his father who was expected to be executed under Qisas Law.
The move helped bring 30 years old enmity to an end between the two tribes as well.
Abdul Ghafoor, the one who has been pardoned said: “From the past 30 years I was put in jail so many times and suffered a lot of problems, the fact that today was forgiven so it ended the past thirty years of suffering and I am happy.”
He hugged Deputy Governor Mawlavi Gul Mohammad and thanked him.
Ghafoor said: “I made a mistake and today I am disappointed by killing Mawlavi Gul Mohammad’s father.”
“Now I can live a free and comfortable life with my family and move forward with my life without any tension,” he said.
Deputy Governor Mawlavi Gul Ahmad visited the court along with other officials and after hearing the court verdict he announced pardoning Mawlavi Abdul Ghafoor and asked the court not to implement the Qisas order on him.
“The best principle in the life is pardon and forgiveness. Pardoning my father’s murderer is my personal decision and now Abdul Ghafoor could continue his normal life in Shiberghan City. “
According to judge Mufti Abdul Wahab Zahid Mawlavi Gul Ahmad’s father was killed by Abdul Ghafoor in 1,991 in Shiberghan.
“Thirty years ago, the father of the deputy governor had a dispute with Abdul Ghafoor over the sale of about two hundred cattle which were brought from Dasht Laili to Shaberghan, but that dispute led to a conflict and Abdul Ghafoor had killed the deputy governor’s father.”
According to Zahid Abdul Ghafoor was arrested at that time but after some time he was freed but the incident triggered enmity between the two tribes and every time the elder of broth tribes were dragged to the provincial councils.
He said that Abdul Ghafoor would be freed after the administration process is completed.
Mohammadullah, Abdul Ghafoor’s relative told Pajhwok Afghan News: “Our tribe faced a lot of problems and disputed after the incident.”
He said after the takeover of the Islamic Emirate Abdul Ghafoor was in prison but due to the mediation of elders and their assurances his bail was approved and he was freed.
After his released, he went to Iran for work and the security forces of Islamic Emirate detained the elders who signed the bill until his return.
Jawzjan Intelligence Affairs Director Mawlavi Khoshal said all the instructions given by the Almighty Allah in the Qur’an are for the sake of order in the life of humanity.
“Pardon and forgiveness have a special place in Islam and are of great importance, the example of which was renewed today in the city of Shaberghan. I wish that other people in the society pay attention to this point and if they are involved in a similar case, they resolve the problems through pardon and reconciliation,” he said.
Civil Society Activist Alisher Entizar said Forgiveness and understanding to resolve legal issues among the people through the Shura and consultation with tribal elders in this province is a long-standing culture of the people of this province.
He added: “In this society, I have witnessed many times that the residents of Jawzjan Province have resorted to ethnic councils to solve some cases that the government was unable to solve.”
“When tensions occur between two peoples, it causes distance and disintegration of the tribes, and the resolution of these tensions brings peace and reconciliation between the people of the two regions, which we always support,” he added.