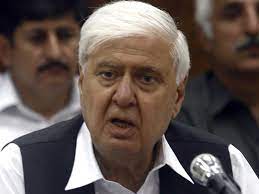 Speaking at a press conference in Abbottabad after chairing a meeting of the party office-bearers from Kohistan, he said that political stability for necessary to improve the economic situation of the country.

Rejecting the demand of the PTI leaders for the fresh elections, he said that the Pakistan Democratic Movement-led government would complete the remaining tenure and the election would take place in its due time. Aftab Sherpao said that incumbent federal government had inherited a weak economy from the PTI government therefore the economic revival would now take time.

The QWP leader said PTI Chairman Imran Khan was bent on creating anarchy to make the country go bankrupt. He said that the former prime minister was responsible for the prevailing economic conditions, adding that he lacked the ability to govern and landed the country into a host of problems due to his incompetence.

He asked the PTI MNAs to return to the National Assembly and play their role in solving the problems of their electorate. He said that the PTI MNAs were not willing to tender resignation from the assembly as they were enjoying all perks and privileges and were not appearing before the speaker to verify their resignations. Aftab Sherpao said the PTI chairman took U-turns on every issue and was changing his narrative on a daily basis. He said that he was now criticizing the ones, who helped bring him to power.

He said that Imran Khan strained the country’s relations with the US, Saudi Arabia and China when he was the prime minister. He said that the PDM government was trying to restore the strained relations and was improving the country’s image. Aftab Sherpao said it was Imran Khan, who violated the agreement with the International Monetary Fund when he was going to face the no-confidence motion to save his government, but it did not work.