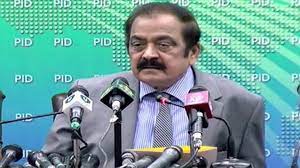 ISLAMABAD: Interior Minister Rana Sanaullah has claimed India is behind the terrorist attack on chief of the banned Jamat-ud-Dawa (JuD) Hafiz Saeed in Lahore last year.

Addressing a press conference flanked by Additional IG CTD Punjab Imran Mehmood in Islamabad on Tuesday, Rana said there is clear evidence of India carrying out terrorist activities in Pakistan.

“Now, Pakistan has decided to present the matter before the international community and expose India’s “nefarious” agenda,” he added.

Rana Sana said Pakistan has been a victim of terrorism for decades and India’s footprints are seen in every terror activity in the country. “Our mosques, imambargahs, important buildings, and gatherings have been targeted and Kulbhushan Yadav is clear proof of India’s terrorist activities in Pakistan,” he maintained.

The minister said India’s malicious activities have gone beyond that of an enemy state just to hide its atrocities in occupied Jammu and Kashmir.

A powerful blast near the residence of JuD Hafiz Saeed in Johar Town took placed in June 2021. The car bomb blast claimed three people and injured 24 others, including a police constable.

The Interior minister said that they had caught all the culprits related to this, referring to the Johar Town blast in Lahore.

AIG Punjab CTD Imran Mehmood said that as soon as this blast took place, CTD registered a first information report (FIR) and within 16 hours, the department “traced” the case. Also, in the initial 24 hours, CTD arrested three terrorists, he added.

The first character was Peter Paul David, Mehmood said, who was traced through the vehicle, he said, noting that the terrorist supervised the operation.

“He was affiliated directly with two RAW agents — Ali Budaish and Bablu Srivastava. These agents would terror finance him,” the CTD official said.

Sajjad Hussain was David’s assistant and assisted him in the Johar Town blast, Mehmood said, adding that Hussain also destroyed the phones used to communicate for the explosion.

The CTD official said David then directed the agencies towards another terrorist — Zia Ullah. “This guy was the main culprit’s (Sami ul Haq) brother. He would also facilitate others in Pakistan and this was the main lead that helped us move forward.”

The official recalled that the police had traced the suspect within 16 hours of the incident. “And within 24 hours we arrested three terrorists.

“Eid Gul and his wife were arrested after 5-6 days. Gul was the person who gave the car to David outfitted with bombs.

After Gul’s interrogation, the CTD was finally able to arrest Sami ul Haq, who Mehmood claimed was the main handler of the RAW-sponsored terror activities in Pakistan.